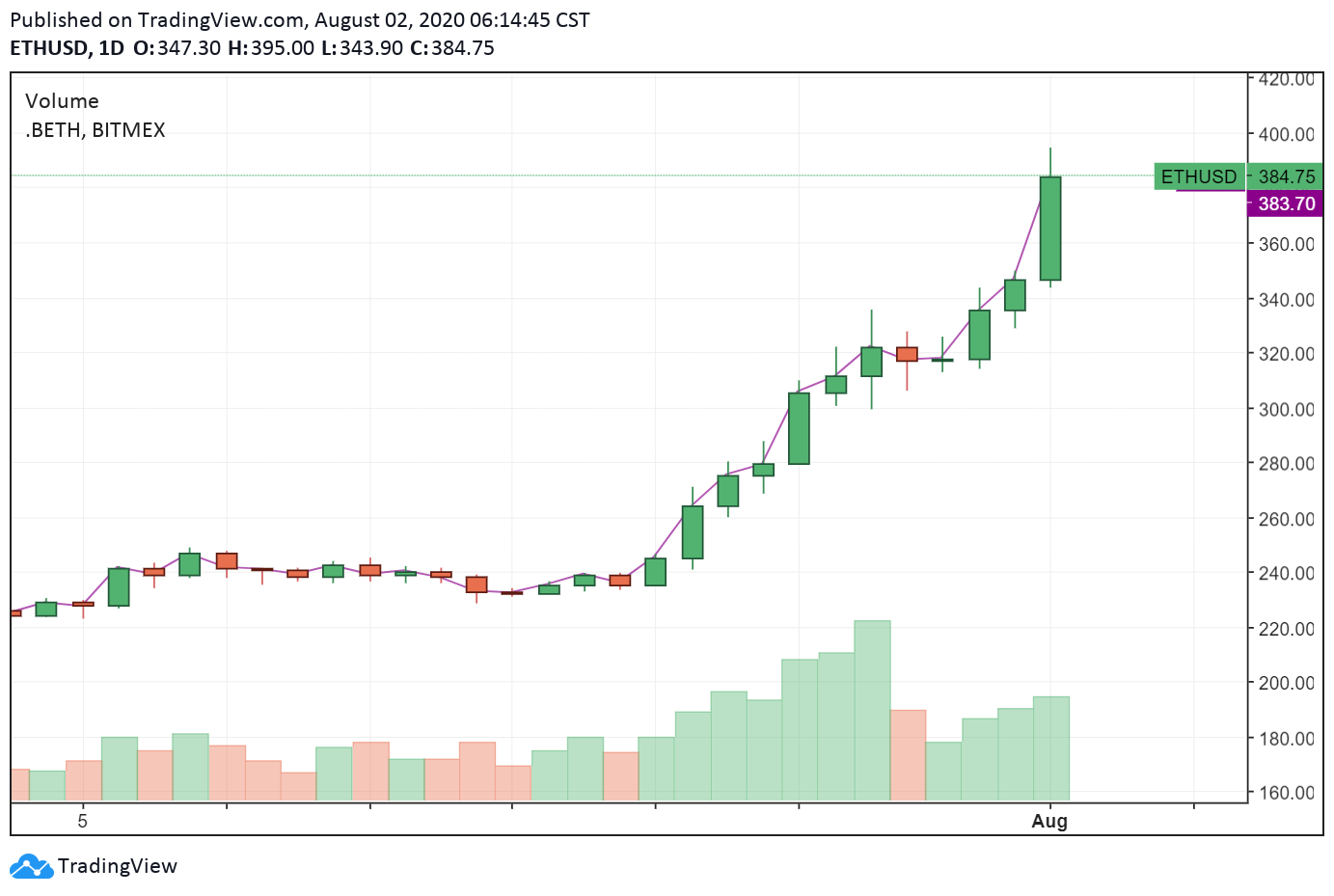 In the last two weeks, Ether (ETH) price increased by 75% as the price rallied from $222 to $400. Many investors believe Ether’s momentum is buoying the entire market, and possibly even pushing Bitcoin (BTC) upwards. Three factors that appear to be triggering the strong Ether rally are: DeFi, ETH 2.0, and the current prolonged rally taking place in the altcoin market.

DeFi growth is pumping altcoins but there are bearish signs

Since mid-June, the total value locked in decentralized finance (DeFi) protocols has continuously surged. The launch of protocol-specific tokens, like Compound’s COMP as an example, led to growing demand for DeFi.

Eventually, users discovered a phenomenon called “yield farming”, which involves users searching for higher yields in the DeFi market and switching from one protocol to another to obtain incentives.

The explosive growth of the DeFi market in a short period led many DeFi-connected tokens to surge rapidly. In July, investors seemingly sold off DeFi tokens and other small market cap altcoins, moving back to Ether and Bitcoin.

On August 1 Ether price reached a 2-year high as it surged to $395 on BitMEX but this has traders warning against a potential pullback. In fact, crypto-trader Edward Morra said:

“Yeah, parabola coming out of another parabola is a sight to behold tbh. Also, this isn’t sustainable and will correct. If you are new to this space – buy dips, don’t FOMO at the top.”

A consistent positive factor that supports the upward momentum of Ether is the anticipation for ETH 2.0. In August, Ethereum developers expect to launch the final testnet of ETH 2.0 called Medalla.

When fully launched, ETH 2.0 would gradually eliminate miners from the network and reward users for participating in the network. The incentive system would enable users to earn a yield on their Ether holdings over a long period.

Kelvin Koh, the co-founder of a venture capital Spartan Black, recently suggested that every phase of Ether would strengthen Ethereum. Koh said:

“Every phase of ETH 2.0 over the next 2-3 years brings Ethereum closer to its final state and will be catalysts for ETH.”

The Ether and Bitcoin rally over the last three days coincided with a drop-off in altcoin prices. In the near-term, the cycle of profit taking could continue if altcoins see regular uptrends.

The opposite remains true when Bitcoin price is stable or consolidating. This creates a cycle that causes BTC and ETH to benefit from multiple profit-taking rallies.

Satoshi Flipper, a popular trader on Twitter, suggested that in the longer-term there is a key resistance for Ether at $780.

It remains to be seen whether the confluence of ETH 2.0, profit-taking rallies, and DeFi growth could push Ether price to higher resistance areas. For now, the sentiment around the altcoin generally remains positive in the medium-term.

After the US Senate Pros and Cons on Digital Money — What Do We Do With It?