The Japanese Yen is experiencing a momentary lift as risk sentiment aligned with stocks and cryptocurrencies takes a knock. The recent alt-coin rout from the Tether de-pegging spilled over into the stable coin market as bitcoin and Ethereum have dropped in sympathy. The Bank of Japan (BoJ) remains resolute on its accommodative monetary policy although warnings of accelerating inflation and deteriorating household income is likely to challenge BoJ officials in the coming months.

The Aussie dollar on the other hand, has dropped massively from the heights reached in April, as the macroeconomic landscape pivots away from strong global demand and strong commodity demand from China in particular. AUD continues to depreciate despite hawkish messaging from Reserve Bank Governor Lowe that multiple rate hikes lie ahead after the 25 basis point hike in early May.

Whenever markets transition from one environment to another, it is best to zoom out and identify key support and resistance from the outset. The Aussie dollar was the darling currency of the global recovery as commodity prices soared alongside global demand (largely from China).

That landscape has changed drastically as Australia’s main trading partner, China re-introduced lockdowns in major cities in an effort to facilitate its zero-covid policy. An unwanted byproduct of the lockdowns is reduced economic activity which also exacerbates the existing supply chain shortages and shipping delays.

The monthly chart shows 3 monthly candlesticks loosely resembling an evening star candlestick pattern, although it is difficult to make a solid case for this as the extended upper wick complicates matters. Nevertheless, the messaging is still the same: markets attempted to push higher but ultimately failed to hold and dropped much lower. Since then, the pair has moved considerably lower, warranting a closer look at the daily chart. 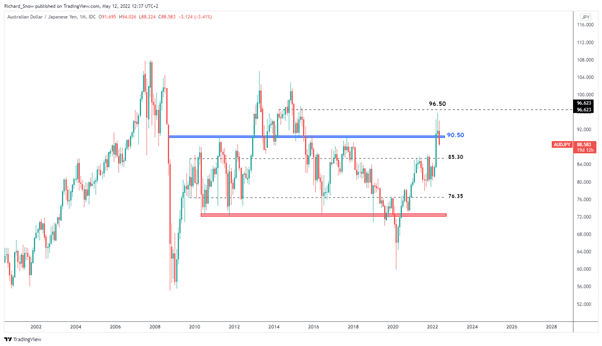 The daily chart shows a sizeable drop lower in today’s trading session, breaching the 90.50 level of resistance. A lower close today would mark 6 successive trading sessions of losses, hinting that the current leg of the bearish move may be due for a minor retracement in the sessions to come. The RSI is approaching oversold territory, supporting the possibility of a move up towards the 90.50 zone – this time as resistance.

Bears may be eying a bounce lower from the 90.50 level for bearish continuation plays as the fundamentals appear to support a bearish AUD/JPY move. Support comes in at 85.30 which admittedly is a long way from the current price. Resistance at 90.50 remains the test for higher future levels in the pair. 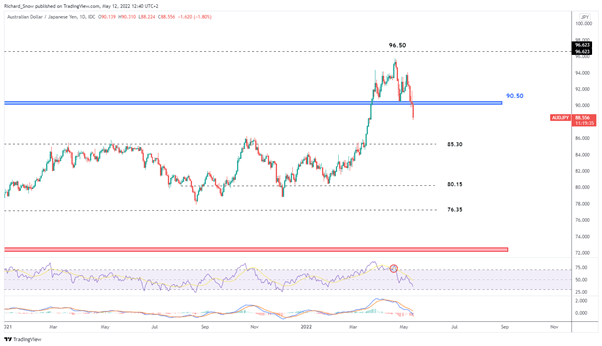 Why the world needs a spot Bitcoin ETF in the US: 21Shares CEO explains