The Australian Dollar fell versus the US Dollar overnight as global risk appetite deteriorated. The risk-off move accelerated as Wall Street traders came back from an extended weekend in the US, with the Dow Jones Industrial Average (DJIA) closing 0.76% lower. AUD/USD’s decline started during Monday’s APAC session when the Reserve Bank of Australia (RBA) rate decision crossed the wires.

The RBA kept its benchmark interest rate at 0.1%, in line with economists’ forecasts. However, the central bank did move to continue asset purchases at the pace of A$4 billion per week until mid-February. Some expected a suspension of tapering plans. The previous balance sheet agenda called for a review in November, but because of the Covid lockdowns across Victoria and New South Wales (NSW), the decision was pushed back, according to the RBA statement. This offers a supportive policy stance while continuing to push toward its ultimate goal of raising rates in 2024.

Traders are bracing for a higher volatility environment as the summer trading months conclude. An economic growth slowdown is all but certain across key economies due to the highly transmissible Delta variant. At the same time, central banks continue to show restraint in rolling back monetary support too fast. This comes amid still-rising inflation. The European Central Bank (ECB) is likely on track to announce easing purchases under its Pandemic Emergency Purchase Programme (PEPP) later this week.

It hasn’t been all doom and gloom, however. Overall, financial conditions remain relatively supportive with global lending rates still near record lows. Rising vaccination numbers are also brightening the outlook for next year and later this year. China reported positive economic data earlier this week, with its August trade balance beating the consensus forecast. China saw a 25.6% year-over-year increase in exports on a USD basis versus 17.3% expected. That suggests global demand for goods was robust during the monthly period.

Today will see Japan’s final gross domestic product for the second quarter cross the wires. The island nation will also report bank lending data for August. The RBA will release its chart pack, as it typically does the day following a rate decision. Later in the day, more Japanese data will cross the wires with the August Eco Watchers survey. The RBA’s Deputy Chair, Guy Debelle, will speak later this afternoon.

AUD/USD’s drop has put it at the 23.6% Fibonacci retracement from the August/September move. Prices will hit the falling 50-day Simple Moving Average (SMA) if the downside continues. The Relative Strength Index (RSI) is tracking lower after a drop from overbought conditions. That, along with the MACD falling after crossing below its signal line, indicates downside momentum is increasing. Moreover, a Bearish Engulfing Candlestick formed overnight as prices turned lower. 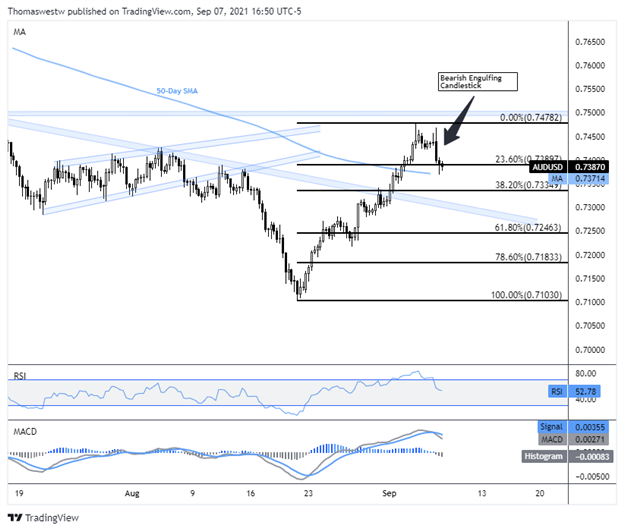