AUD/USD snaps the recent series of higher highs and lows after trading to a fresh yearly high (0.7540) at the start of the week, and the exchange rate appears to be reversing ahead of the October high (0.7556) as the recent rally fails to push the Relative Strength Index (RSI) into overbought territory.

AUD/USD bounces back from the session low (0.7456) as hopes for a Russia-Ukraine peace deal drags on the Greenback, and a further improvement in risk appetite may keep the exchange rate afloat as it shows a limited reaction to the larger-than-expected rise in Australia Retail Sales.

It remains to be seen if the 1.8% rise in household spending will influence the Reserve Bank of Australia (RBA) as the central bank acknowledges that “while inflation has picked up, it is too early to conclude that it is sustainably within the target range,” and it seems as though Governor Philip Lowe and Co. will stick to a wait-and-see approach for the foreseeable future as “the Board will not increase the cash rate until actual inflation is sustainably within the 2 to 3 per cent target range.”

As a result, the diverging paths for monetary policy may have longer-term implications for AUD/USD as Chairman Jerome Powell and Co. look to implement a series of rate hikes over the coming months, and swings in investor confidence may sway the exchange rate ahead of the next RBA meeting on April 5 as the recovery in global equity prices persists.

Until then, the commodity bloc currencies may continue to outperform their major counterparts as the Federal Open Market Committee (FOMC) plans to“begin reducing its holdings of Treasury securities and agency debt and agency mortgage-backed securities at a coming meeting,” but a further rise in AUD/USD may fuel the recent flip in retail sentiment like the behavior seen during the previous year. 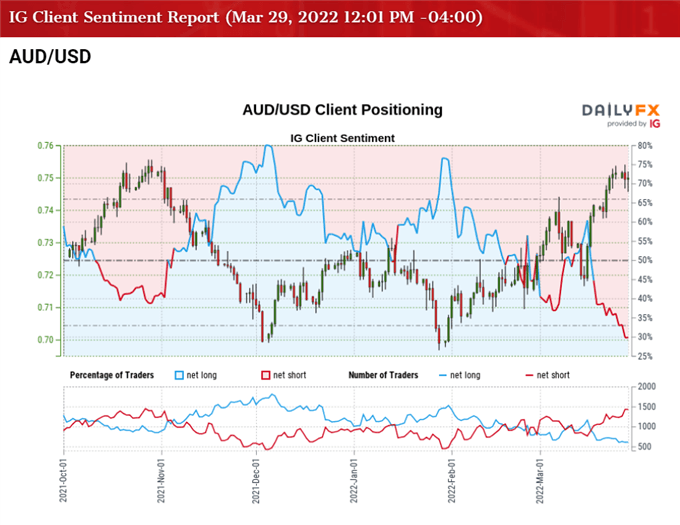 The IG Client Sentiment report shows 30.76% of traders are currently net-long AUD/USD, with the ratio of traders short to long standing at 2.25 to 1.

With that said, AUD/USD may stage further attempts to test the October high (0.7556) amid the recovery in risk appetite, but the bullish momentum appears to be abating as the recent rally in the exchange rate fails to push the Relative Strength Index (RSI) into overbought territory. 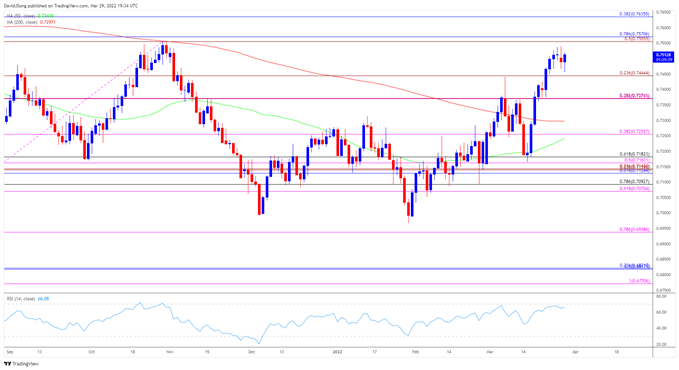 Pro traders curb their enthusiasm until Ethereum confirms $3,400 as support