The Australian Dollar fought back in the Asian session today after the US Dollar regained the ascendency after several Fed speakers re-iterated their hawkish stance.

Solid jobs data yesterday did little to recalibrate rate hike expectations for the RBA’s monetary policy meeting next month. Conversely, the Fed are stating the case for a ‘higher for longer’ rate outlook.

Overnight we heard from the reliably hawkish St. Louis Federal Reserve President James Bullard. He said, “the policy rate is not yet in a zone that may be considered sufficiently restrictive.”

Later in the session, Minneapolis Fed President Neel Kashkari crossed the wires saying, “I need to be convinced that inflation has at least stopped climbing, that we’re not falling further behind the curve, before I would advocate stopping the progression of future rate hikes,”

Treasury yields went higher across the curve with the short end adding more than the back end.

The hawkishness spooked equity markets with Wall Street finishing slightly in the red. APAC stocks have a faired little better with most indices seeing a small gain.

USD/JPY is steady despite Japanese national CPI year-on-year to the end of October coming in at 3.7% today, above 3.6% anticipated and 3.0% previously. The hot inflation number comes on back of a series of disappointing data prints this week.

Japanese core machine orders were -4.6% month-on-month for September. The Ministry of Finance (MoF) Japan tertiary industry activity index came in at -0.4% for September.

Crucially, Japanese seasonally adjusted 3Q quarter-on-quarter GDP was -0.3% against forecasts of 0.3% and against the 0.9% previously.

Although unemployment is reasonably low, Japan GDP and CPI figures heighten the risk of stagflation for the Japanese economy.

Crude oil had an uptick in Asia today after sliding around 5% yesterday. The WTI futures contract is near US$ 82.50 bbl while the Brent contract is around US$ 90.50 bbl at the time of going to print.

Gold is steady near US$ 1,760 after dipping overnight.

After UK retail sales data, the US will see home sales figures. There will also be a number of central bankers providing commentary.

After closing back inside the upper band of 21-day simple moving average (SMA) based Bollinger Band the price moved lower. This may indicate that a reversal might be unfolding. 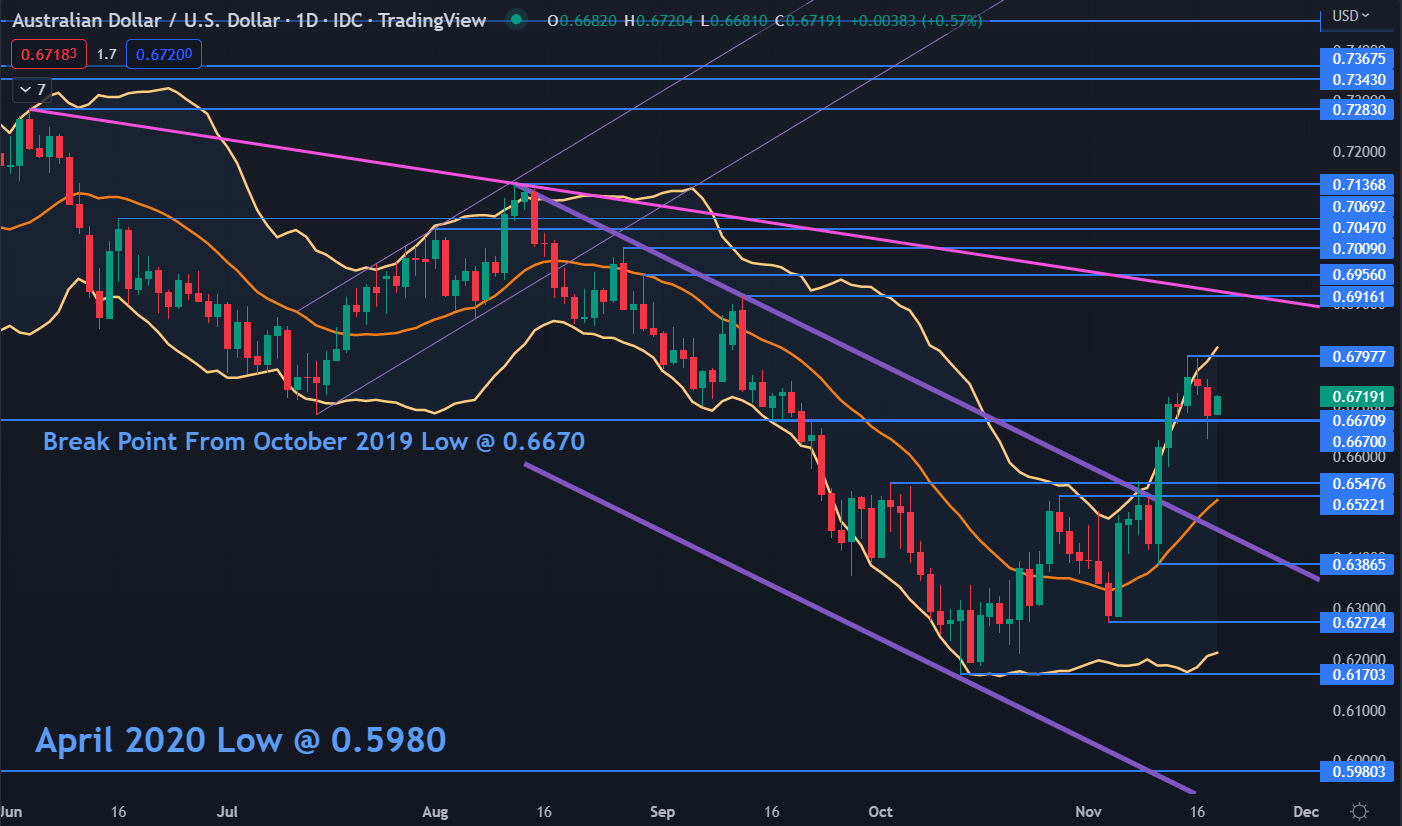 Canadian Dollar May Lose Ground Even as the BOC Delivers