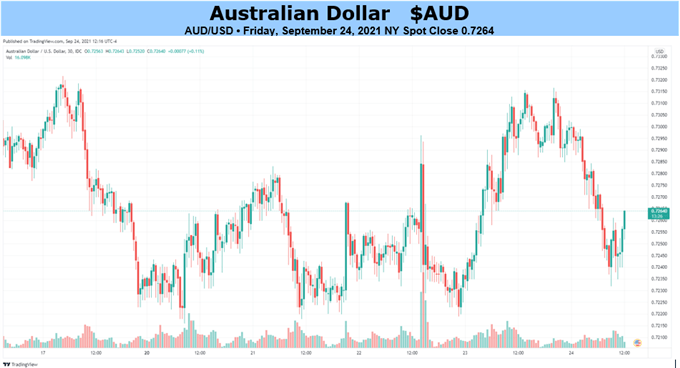 Central banks gave their audience what they wanted this week, while the Chinese government remains guarded over Evergrande’s debt obligations. Commodity prices have seen higher volatility with sector specific issues at play. Higher long end bond yields are emerging, but the focus for AUD/USD will be the differential.

The FOMC delivered on market expectations during the week and the tapering of the Fed’s bond buying program will almost certainly be announced at the November meeting. The RBA minutes seemingly confirmed that the current monetary policy stance will be maintained until February 2022. With both central banks heading in the same direction, currency markets turned to bigger issues.

The Evergrande saga weighs over markets as some of the bond coupons are being paid and others are yet to be. There is still a high degree of uncertainty about what will unfold. The market perception is that the Chinese government will take measures to prevent contagion but that there will be pain for investors.

The degree of losses from Evergrande may determine prices for risk-sensitive assets and the AUD/USD will be susceptible to these shifts in sentiment.

Iron ore prices stabilised after a sell-off on Monday, but they are still a long way from the highs seen earlier in the year. Going forward, the commodity could see lower levels on decreased Chinese demand. However, a price below US$80/tonne start to become unprofitable for marginal producers, which could hamper supply.

While iron ore is a focus for the AUD currency market, Australian exports of oil, gas, coal, and liquefied natural gas (LNG), account for a significant contribution to export earnings. These energy markets continue to trade higher amid numerous supply constraints that don’t look likely to be resolved soon.

In the aftermath of the FOMC meeting, the US yield curve steepened with long end bonds backing up. Australian government 10-year yields followed suit and the spread to the US government 10-year is inching toward parity. Should Australian yields go higher than US yields, this may be supportive for AUD/USD.

Looking ahead, Australian retail sales data is due on Tuesday and building approvals will be released on Thursday. The US will see GDP data at the same time as unemployment claims on Thursday. 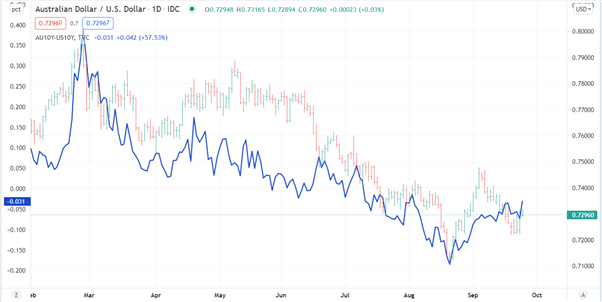 US Dollar Gets a Small Bid on PCE Release, Employment Costs Rise