The Australian Dollar scampered higher overnight after the US Dollar took a beating in the wake of the Federal Reserve meeting minutes from earlier this month.

The minutes showed a willingness by some board members to step back from the jumbo 75 basis point (bp) hikes that have been seen at four consecutive meetings, including the last one.

This message has been telegraphed by several Fed speakers since that Federal Open Market Committee (FOMC) meeting. The market priced a 50 bp hike at the December gathering before and after this month’s meeting. It continues to do so now.

The market appears to have interpreted the meeting minutes as somewhat dovish despite very little new information emanating from them.

Nonetheless, equities went north while Treasury yields sailed south along with the US Dollar. Metal commodities generally got a boost, and this has given the Aussie Dollar an extra tailwind.

At the same time, crude oil has taken a hit and the Canadian Dollar is noticeably lower. The weakness in the Loonie was compounded by comments from Bank of Canada Governor Tiff Macklem.

This remark seemed to gain most attention: “The tightening phase will come to an end, and we are getting closer, but we are not there yet.”

That has been interpreted by the market as less hawkish than previously. As a result, AUD/CAD is approaching a two-month high above 90 cents.

Holiday conditions lie ahead today with Thanksgiving in the US and markets could be somewhat illiquid, potentially providing skittish conditions.

AUD/USD peaked just under 68 cents last week and on that move it broke the upper band of the 21-day simple moving average (SMA) based Bollinger Band. Once the price moved back inside the band, it slid lower before the rally over the last few days.

A move back inside the Bolling band can potentially be an indication of a pause in the bullish rally, or a potential reversal. A break above that recent high of 0.6798 might nullify that signal. There could be resistance ahead of that level.

The September high of 0.6916 currently coincides with a descending trend line and may offer resistance.

On the downside, support may lie at the recent low of 0.6585 ahead of possible breakpoint support at 0.6547 and 0.6522. Below there, an ascending trend line currently dissects with the a prior low at 0.6386 and may provide support. 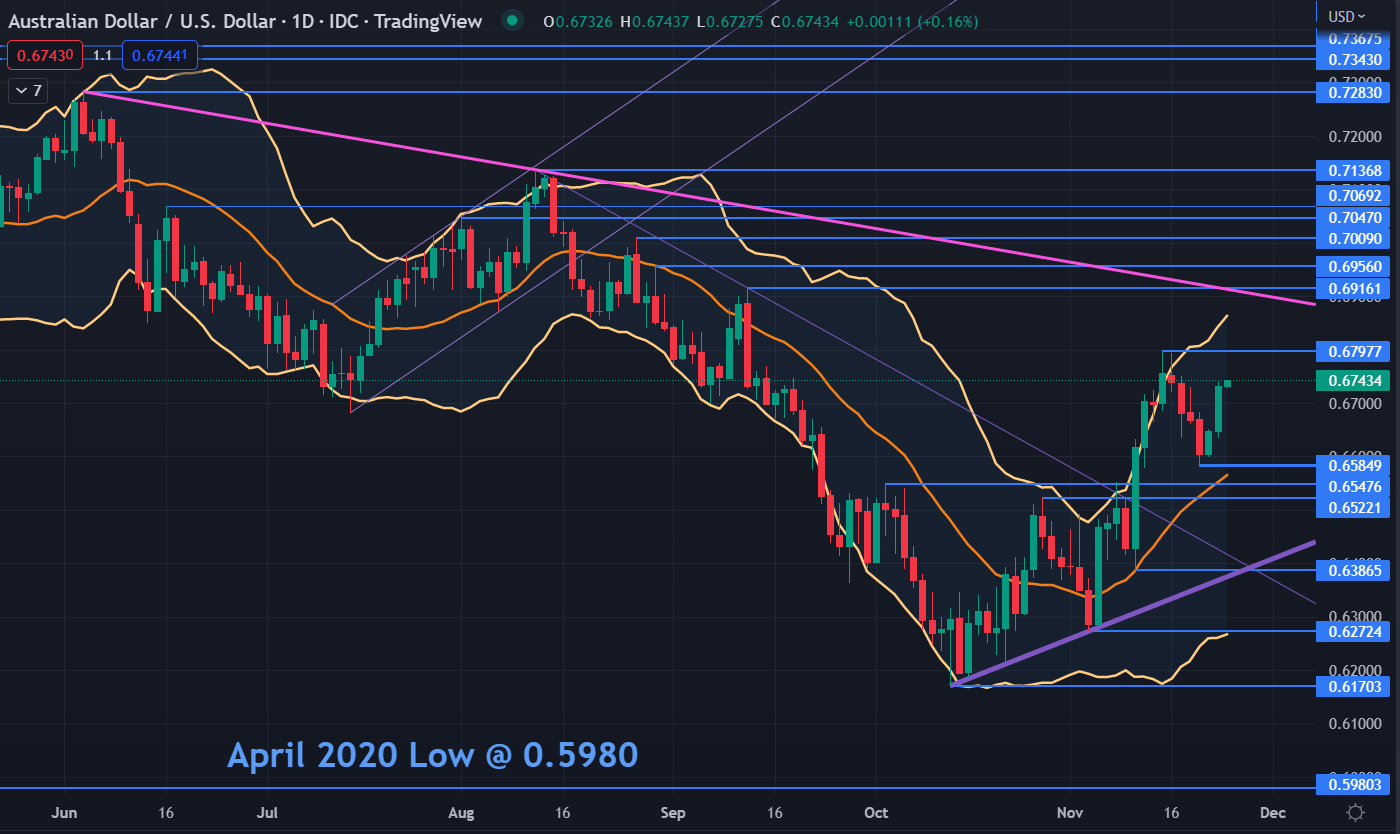 Here’s why $16.5K is critical for November’s $1.14B Bitcoin options expiry

Crypto has survived worse than the fall of FTX: Chainalysis

Malaysia has triumphed in FX reforms – but what comes next?