Earlier this morning, UK jobs data was released with employment change for March beating estimates while the unemployment statistic missed (see calendar below). Wage growth via average earnings also missed forecasts adding support to the less hawkish bias. Initial reaction saw the pound weaken against the greenback after an ease in the labor market could be the start of an economic shift. Later today, U.S. PPI will close off the event list before tomorrow’s key FOMC rate decision.

While there is much talk around a possible 75bps hike from the Fed, a 50bps jump could dampen dollar strength while the Bank of England (BoE) may be skewed towards the 25bps jump as opposed to the possibility of 50bps prior to today’s unemployment figure. The previous BoE announcement saw three officials vote for a 50bps hike and could remain the same this time around however, a majority vote for half a percentage point is unlikely in my opinion and would really come as a surprise. 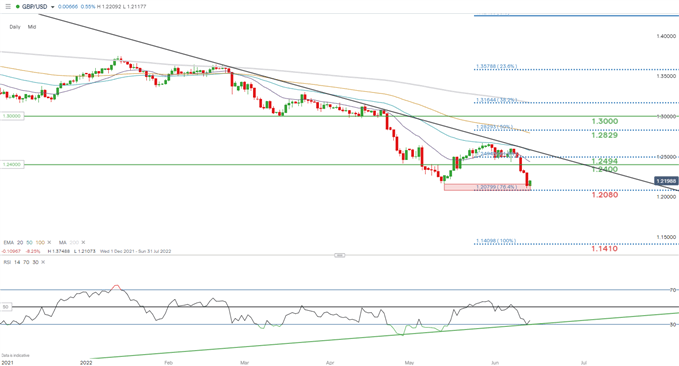 Daily GBP/USD price action shows bears testing the key area of confluence around the 76.4% Fibonacci at 1.2080 (red) for the second time this year. A confirmed candle close below this level should open up further room for additional downside towards the March 2020 swing low at 1.1410. The current economic backdrop definitely points to this bearish continuation however technical signs are displaying some bullish divergence between the RSI and cable price action. The RSI suggests slowing downward momentum while prices are printing lower lows. Traditionally, bullish divergence points to impending upside however timings can be ambiguous. I would be extremely cautious around trading against this strong downside move but we have to consider the central bank deviation between the two nations and favor the greenback.

IG Client Sentiment Data (IGCS) shows retail traders are currently LONG on GBP/USD, with 77% of traders currently holding long positions (as of this writing). At DailyFX we typically take a contrarian view to crowd sentiment resulting in a downside bias.

Rand Update: ZAR Strength May Be Short Lived Ahead of Budget Speech