Risk appetite evaporated as Asia-Pacific trade developed with the US Dollar and Japanese Yen benefiting from haven-inflows.

The risk-associated Australian Dollar fell alongside the S&P 500 futures as Covid-19 deaths in California and Florida surged to fresh daily records.

Looking ahead, US PPI and Canadian jobs data headline the economic docket with investors glancing to next week and the start of the US earnings season.

The Canadian Dollar may come under pressure with employment data on tap, after Finance Minister Bill Morneau’s fiscal snapshot projected a $343 billion budget deficit for 2020-21.

Almost 6 million Canadians “either lost their jobs or saw their hours significantly scaled back over March and April” resulting in the implementation of the “government’s economic response plan”.

This “decisive and substantial” fiscal support package prevented the “contraction in real GDP to reach over 10 per cent” and the unemployment rate from rising a “further 2 percentage points” by replacing “more than $40 billion lost in labour income”.

However, these temporary measures came at a cost, with Canada’s hallowed AAA credit rating downgraded to AA+ by Fitch, as the nation’s debt-to-GDP climbed 31% in the last year.

With Chamber of Commerce President Perrin Beatty believing the surge in debt will “undermine Canada’s fiscal capacity for decades”, it is apparent that a rebound in the labour market is needed to get the local economy back on track.

To that end, unemployment figures may dampen the outlook for the risk-sensitive Canadian Dollar should the jobless rate disappoint, with a drop of 1.7% expected after spiking to a staggering 13.7% last month – the highest rate since records began in 1976. 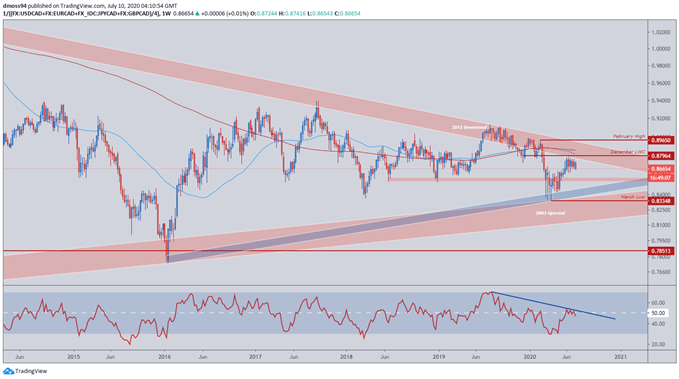 The trade-sensitive Canadian Dollar seems poised for further declines on a weekly timeframe, as the RSI fails to breach above its midpoint into bullish territory. 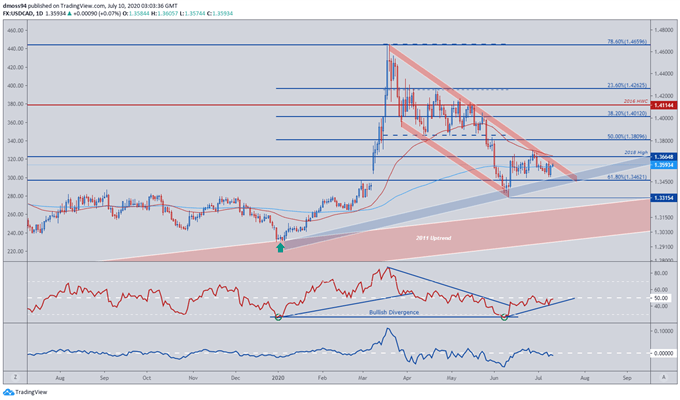 From a technical perspective, the USD/CAD exchange rate continues to trade in a tight 200-point range, remaining capped by Descending Channel resistance extending from the March high (1.4667).

With price oscillating either side of the 200-day moving average (1.3575) the development of the RSI and Momentum indicators may prove pivotal in the determination of future directional bias.

As the Momentum indicator continues to trek into negative territory, and the RSI fails to break above its midpoint, further declines may be in the offing.

However, the RSI continues to hold above its 4-week uptrend, potentially encouraging would-be buyers should the oscillator strengthen above 50. 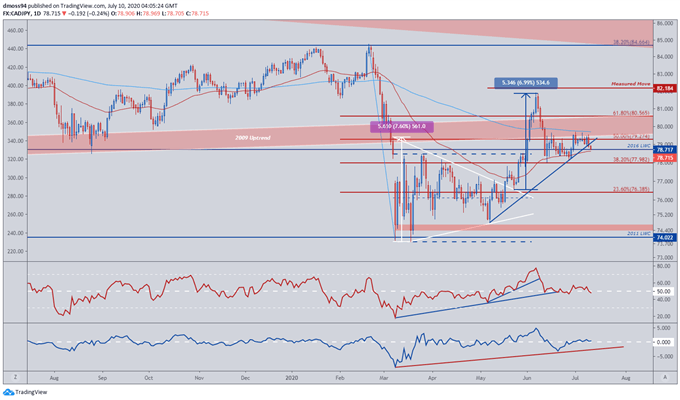 After breaking out of Symmetrical Triangle consolidation in late May the CAD/JPY exchange rate surged through the 200-DMA (79.70), pushing back above the 2009 uptrend to fall just shy of the implied measured move (82.18).

However, a sharp 4-day reversal was stoked by the steep decline of the RSI as it dived below 70, propelling price back to support at the 38.2% Fibonacci (77.98).

CAD/JPY seems poised for further declines after breaking through the uptrend extending from the May, with the RSI breaking below 50 potentially intensifying selling pressure.

A daily close below the June low (78.02) may validate bearish potential, signalling the resumption of the primary downtrend and perhaps fueling a decline back to psychological support at the 77 level.

Toyota: Standing Pat Until Coil Plays Itself Out