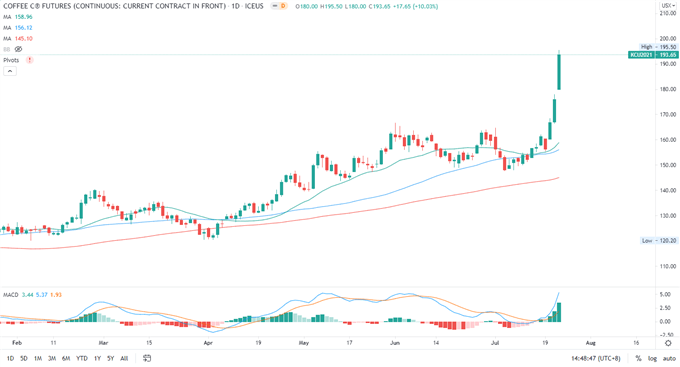 Coffee C futures contracts – the world’s benchmark for Arabica coffee – surged to the highest level seen since December 2014. This happened after extreme cold weather hit Brazil’s major coffee fields. Temperatures in south Minas Gerais – the country’s most productive region – fell below zero degree Celsius, causing frost and freeze. This may severely impact coffee plants’ yield for this and next year. The usual average temperature at this time of the year in the region is at around 20 degree Celsius.

Weather forecasts suggest that unusual weather conditions could persist until the end of this month, paving the way for prices to aim at higher levels should the market anticipate wider damage. Technically, 200 may serve as a psychological resistance, breaching which may open the door for further gains toward 225 – the 2014 high.