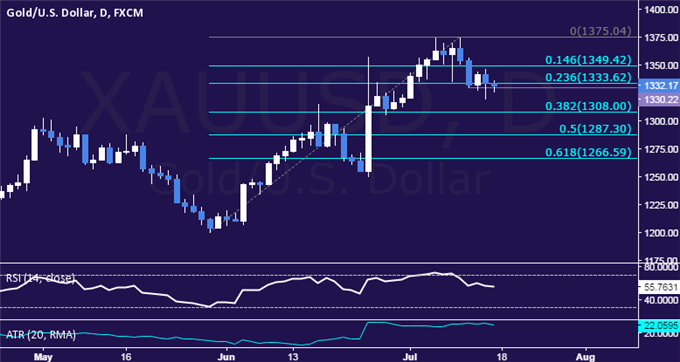 Crude oil prices swung between losses and gains over the past 24 hours, ultimately ending lower during a volatile trading session. At one point, the commodity was down as much as 4.42% before trimming most of its weakness. Meanwhile, anti-fiat gold prices finished just cautiously higher as the yellow metal rallied during the Wall Street trading session alongside the S&P 500.

Growth-sensitive oil prices remain tied to ongoing US fiscal stimulus talks. Initially, sentiment was fading amid doubts of a deal between lawmakers. However, oil received a lift as President Donald Trump said that he was willing to go beyond the Republican-lead US$1.8 trillion package. It also did not hurt that US oil stockpiles shrunk by 3.8 million barrels last week, larger than the -2.1 million consensus.

Speaker of the House Nancy Pelosi also said that a Covid package will not have to wait until January. The need for further economic support is arguably rising. The Citi Economic Surprise Index tracking the US is near a 3-month low, showing that the level of rosy surprises in data has been fading since the Summer. This could open the door to lackluster outcomes ahead.

As the week wraps up, US retail sales and University of Michigan consumer sentiment are due during the Wall Street trading session. A disappointment could deteriorate market mood further, denting crude oil prices and the S&P 500. If this fuels demand for haven assets, such as the US Dollar, that could in-turn send gold prices to the downside. Of course, progress towards a stimulus deal could offset these jitters.

WTI crude oil remains in a consolidative state since prices appeared to top in the middle of August. The commodity has been ranging between support and resistance at 36.15 and 43.87 respectively. A bearish ‘Death Cross’ formed in early September as the 20-day Simple Moving Average (SMA) crossed under the 50-day SMA. However, oil also pushed through a falling trend line from January. Confirmation is however lacking.

What is the road ahead for crude oil in Q4?

Gold prices have lately been struggling to add onto gains since XAU/USD found support in late September. Falling resistance from August seems to be maintaining a slight downside bias along with a bearish ‘Death Cross’. A close under short-term rising support from late September could open the door to testing the 1848 – 1863 zone for another attempt to extend losses since August.

What is the road ahead for gold in Q4?

Ethereum will become the main asset for investors in 2021