The Dax sank in European trade as investors fret that the latest show of central bank determination to tame inflation will slow economies rapidly. German retail sales increased slightly in May, rising by 0.6% compared with the previous month, even as high inflation continued to weigh on consumers, data showed on Thursday. This small piece of good news has been overshadowed by French inflation climbing to a record high of 6.5% in June, raising fears that Friday’s official Eurozone CPI data will soar to a new record.

Meanwhile, European Central Bank (ECB)President Christine Lagarde warned in a speech at the central bank’s annual forum this week that inflation in the Eurozone is “undesirably high,” and the central bank will go “as far as necessary” to bring inflation back down to its 2% target.

The sectoral breakdown is not pretty as red dominates with consumer cyclicals and utilities posting losses of 4.7% and 4.6% respectively. 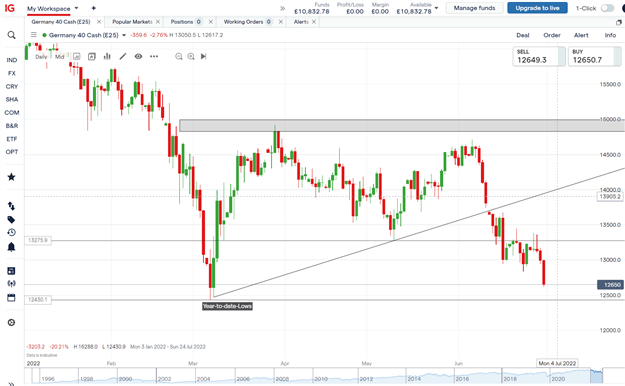 From a technical perspective, yesterday saw a continued decline on the Dax as we approached the key psychological 13000 level. We did however fail to get a daily candle close below this key level which could lead to a potential pullback.

We have pushed down during the European session breaking below the psychological level as we approach the year-to-date lows (see chart) which could provide support. We could see a bounce at this level, while a retest of the 13000 level may provide sellers an opportunity to go short.

TheFTSEfell in the European session, putting it on track for its biggest monthly loss since March 2020. Nationwide reported slower house price growth with the number of approved mortgages declining to pre-pandemic levels. It came as UK household incomes fell for a fourth consecutive quarter at the start of the year, marking the longest run of declines since 1955. Meanwhile, Bank of England governor Andrew Bailey said policymakers “have the option” of acting more forcefully to rein in inflation if needed.

The sectoral breakdown is red with real estate suffering the most, down 3.4% for the session. Notable movers included the EasyJet PLC and Anglo American down 6.7% and 5% respectively. 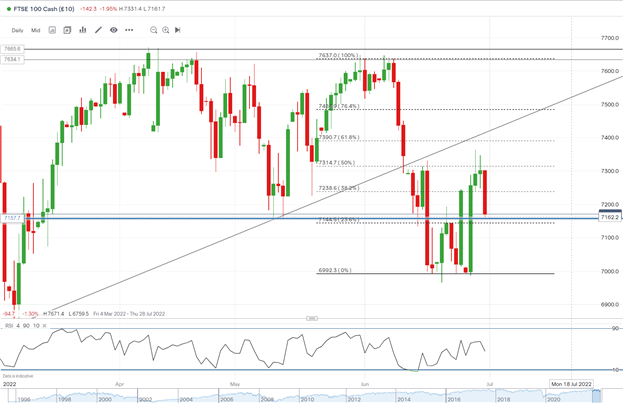 The FTSE ran out of steam as it approached the 61.8% fib level before a sharp rejection. We had an indecisive daily candle close yesterday below the 50% fib level before declining. As we approach the 23.6% fib level, we could find support here while a break below should see further downside.

The Dowfell in premarket trade as Central Bank chiefs voiced their renewed commitment to control inflation no matter what pain it caused. While there was little new in the messaging, it was another warning that the era of cheap cash which had turbocharged share prices for years is coming to an end, with no sign yet that the new quarter will bring in brave bargain hunters.

This year’s dramatic slide in asset prices has been led by tech-heavy indexes and stocks more sensitive to rising interest rates.

Meanwhile, US Core PCE the Fed’s favorite inflation gauge came in better than expected with the Dow experiencing a slight bounce which may not be long lasting. 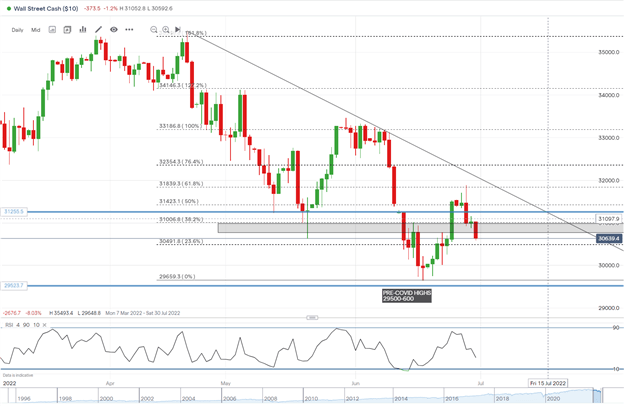 From a technical perspective, yesterday we had an indecisive daily candle close at the support area 31000 (grey box on the chart).

We have pushed below support aggressively in premarket trade as we approach the next support area 30500 which lines up with the 23.6% Fib Level. We could see a bounce here which may offer would-be-sellers a better opportunity around the 31000 area.

Thailand’s Crypto Utopia — ‘90% of a cult, without all the weird stuff’