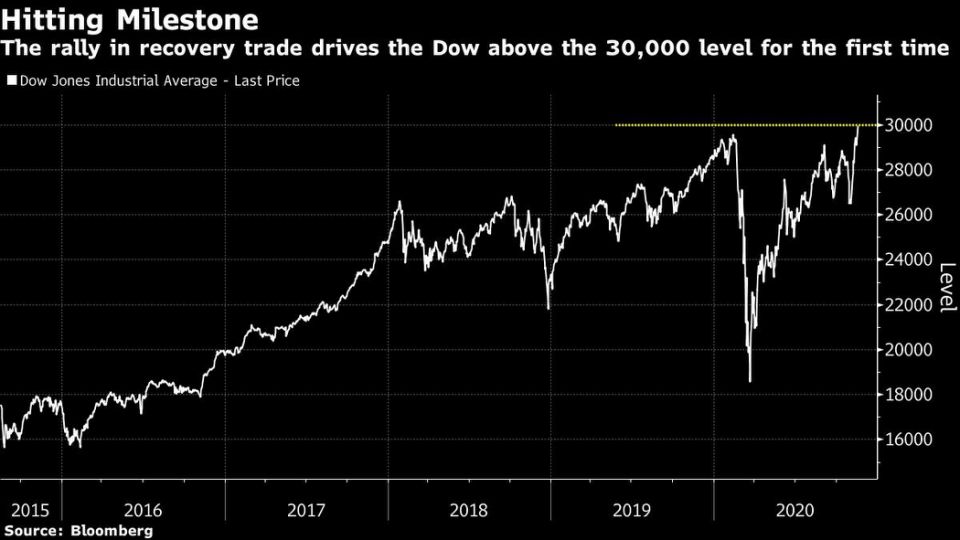 The Dow Jones charged into record territory in Tuesday trading, passing the 30,000 mark for the first time in its history. Surging nearly 12,000 points over the last 8 months, the Dow Jones has put in an incredible recovery that has only picked up pace in November as covid vaccine hopes bolster demand for some of the most beleaguered sectors in the coronavirus era. Recent political clarity and the appointment of Janet Yellen as Treasury Secretary under the Biden administration have only added to the overwhelmingly bullish mood in the market.

That being said it is important to keep in mind – particularly in times like these with the Dow posting a 13% return in a single month – that the market can in fact fall. While sentiment is understandably upbeat and seasonality might be an added tailwind, there are concerns on the horizon. At the forefront of these worries may be the lack of stimulus.

The conversation around stimulus has shifted from “if” to “when and how much,” in recent weeks but the fact remains that stimulus is nowhere to be found. While it does seem likely that further assistance will be offered, there is no guarantee the aid will arrive immediately after Joe Biden takes office. Further still, 12 million unemployment benefits are set to expire on December 26 and the housing moratorium shortly thereafter on December 31.

Combined with a possible end to the Fed’s lending facilities, there could be a wave of negative developments set to strike the market all at once during a period of the year that may see reduced liquidity due to the holiday conditions. These unique circumstances and waning tailwinds, could combine to move the sentiment needle in a meaningful way and work to erode the Dow Jones, Nasdaq 100 and S&P 500.

On the other hand, it is difficult to argue against fresh all-time highs so calling a top at this stage seems rather presumptuous. Furthermore, the broader foundation beneath the equity market remains very accommodative so a potential pullback might be mere consolidation, a healthy development after stocks have surged to the degree that they have this month.

Either way, it is too early to argue the Dow’s end is near, but it is important to keep these events in mind as they could deal a significant blow to sentiment. Since negative news is present, but the focus has been on previously outlined positive developments, it seems sentiment itself has been one of the few drivers behind these gains in recent weeks – in my opinion. In the meantime, follow @PeterHanksFXon Twitter for updates and analysis.

Losers in FX Markets After the US Presidential Election: USD &amp; Gold

NFTs on the news: Mega-whale Pranksy brings collectible highlights to the fore

The adventures of the inventive Alex Mashinky