The Dow Jones Industrial Average is set to undergo a major change before next week after a 4-for-1 Apple stock split necessitated modifications to the blue-chip index. As the index’s highest weighted member at roughly 12%, Apple commands significant sway over the entire collection of stocks and a stock split from AAPL would shift the exposure of the index drastically. Thus, S&P Dow Jones Indices has announced it will change three components before the market opens on August 31. 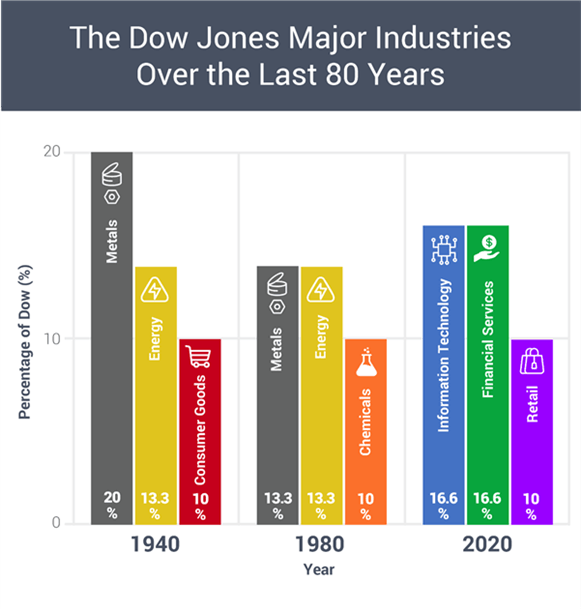 Raytheon, Pfizer and Exxon Mobil are the three constituents destined for removal, the latter of which has been a Dow Jones staple since it was added in 1928, then known as Standard Oil. In their place will come Honeywell, Amgen and Salesforce as S&P Dow Jones Indices looks to recoup some of the weighting lost by the technology sector and better reflect the industries of the American economy. To that end, a 4-for-1 split will send Apple’s rank from first to seventeenth – at current prices – and reduce the tech sector’s weighting on the index by roughly 9% if not for the addition of Salesforce.

Without the change, therefore, the Dow Jones would likely fall further behind the Nasdaq 100 and S&P 500 which have higher exposure to the high-flying technology sector. While many market pundits have argued some stocks in the industry have ballooned into a bubble, they have been the commanding force behind the covid recovery rally. As a result, their price gains are crucial to the performance of the broader index.

Learn all about the history of the Dow Jones: Dow Jones: A True Cross Section of American Industry?

That said, the quick decision from the index curators is commendable, but it also highlights some of the downfalls of the price-weighting system employed by the Industrial Average. Exchanging three stocks in a single transactions equates to a 10% turnover in the Dow Jones – an actuality that could give rise to increased volatility in some of the stocks slated to change listings.

In terms of immediate price reactions for the entire index, the transition should see little effect. Over the longer term however, the addition of Salesforce – set to be the sixth largest component – could help the Dow play catch up with the Nasdaq 100, especially if Apple continues its parabolic rally and reclaims lost control. In the meantime, follow @PeterHanksFX on Twitter for further stock updates and analysis.

Dave Portnoy offers to ‘save’ Bitcoin and Chainlink

US Dollar Tanks After Not Hawkish Enough Fed Hike, Bank of England Eyeing a Lift