Few products are as costly and complex as interest rate futures. For retail traders looking for interest rate exposure, Treasury ETFs are a much better place to start.

But before buying a bond ETF, take the time to understand a few basics about rates. Before buying a Treasury ETF, it’s important to understand a few basics about rates. First, know that there’s no one interest rate. Interest rates are determined by a number of factors, one of which is how likely a borrower is to pay back the money. The greater the risk of default, the higher the interest rate. This is referred to as credit risk. To avoid credit risk and just trade rates, use Treasury ETFs. Backed by the robust U.S. economy, Treasury debt is largely considered “risk-free” with zero credit risk and serve as a global benchmark for interest rates. To trade rates and avoid credit risk, look to trading U.S. Treasury yields because U.S. government debt is largely considered “risk-free” because of its high credit quality.

Originally published In Luckbox Magazine. Subscribe for free at getluckbox.com/dailyfx

A second factor that determines the interest rate is the length of the loan. Treasury debt is auctioned with maturities ranging from 30 days to 30 years, and each has its own interest rate. Plotting each of these rates and their respective durations creates the yield curve. (See “Yield Curve,” below.) 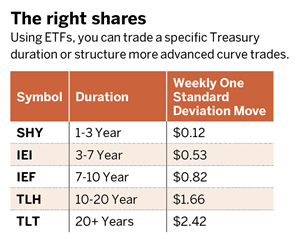 Notice that the greater the duration of the loan, the greater the interest rate. When choosing which rate to trade, remember that longer-dated debt also has greater volatility. Several popular Treasury debt ETFs and their weekly one-standard-deviation ranges are shown in the chart. The further out on the curve an investor trades, the greater the weekly movement.

While these ETFs provide a great way to trade rates, note they represent a basket of Treasury debt prices and not their yields . Debt prices and debt yields move inversely. Thus, a trader who thinks 20+ year interest rates will decrease could buy, and one who thinks they will increase could sell. An increase in debt prices is always associated with a decrease in yields and vice versa. While price is an equalizer in comparing bonds, traders live in a world of yield. So an inversion is often required to go from trade idea to trade execution.

Besides trading a specific portion of the yield curve, advanced interest rate trading strategies can also be constructed using these ETFs. A trader could combine them to trade twists and shifts in specific sections of the yield curve. Instead of buying or selling 20+ year rates, a trader could buy iShares 1-3 Year Treasury Bond ETF (SHY) and sell iShares Barclays 20+ Year Treasury Bond ETF (TLT) simultaneously to construct a yield curve trade that profits if the difference between short-term and long-term rates increase. This is referred to as a steepening of the yield curve. With products covering all parts of the yield curve, traders can trade almost all expectations of economic change with interest rates. (See “The Right Shares,” below.)

Originally published In Luckbox Magazine. Subscribe for free at getluckbox.com/dailyfx

British Pound Forecast – The Bank of England is Walking a Tightrope

Algo choice: how to implement a market impact/volatility trade-off