While the most obvious risk to both currencies is the renewed focus on the Northern Ireland Protocol as the UK Foreign Secretary Liz Truss communicated the UK’s response to the EU’s latest proposal which she said would actually make matters worse. The longer the situation persists with neither side looking to make any significant concessions, the risk of triggering Article 16 and the bigger threat of an ensuing trade war, rises.

However, recent comments from the Bank of France Governor Francois Villeroy stating, “a euro that is too weak would go against our price stability objective”, has stoked rate hike odds which now anticipate hikes of over 100 basis points by year end. While the first realistic rate hike could materialize in July, markets tend to price in the result ahead of time, elevating the euro.

While the euro’s rate hike odds maintain an upward trajectory, the UK has recently turned the other way as 2 members of the BoE view risks to inflation and growth as more balanced. Rates markets now see just 120 further basis points in rate hikes to year end compared to around 200 for the Fed. Add to that the cost-of-living squeeze which got worse after Wednesday’s 9% inflation print and the first signs of a contraction last Thursday where GDP for March contracted 0.1% month on month. In contrast, ECB members have played down the probability of recession in the eurozone.

Unfortunately for the pound the data doesn’t seem to be getting any better as retail sales data tomorrow is expected to show a sizeable 7.2% contraction for April, compared to the same time last year.

The euro has started to make higher highs against the pound with the latest pullback from the high providing softer levels for EUR/GBP bulls. Over the nearer-term, 0.8470 appears as the most relevant level of resistance followed by 0.8500. The average true range indicator reveals elevated levels of volatility despite appearing to have peaked, so risk management warrants closer attention. Support is at 0.8450 (provided support twice in 2021) followed by 0.8410. 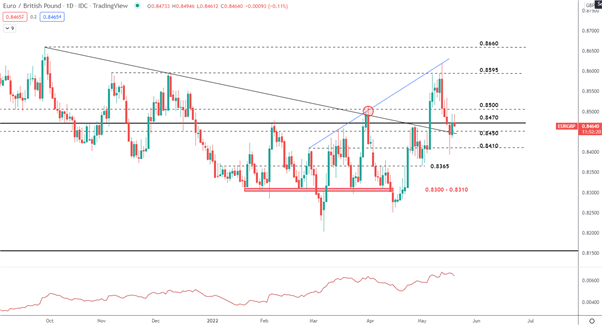 The broader outlook for a bullish EUR/GBP scenario gains credibility above 0.8595 and 0.8660 which is still a long way from current levels but underscores the potential of the larger move when considering the fundamental outlook behind both currencies. 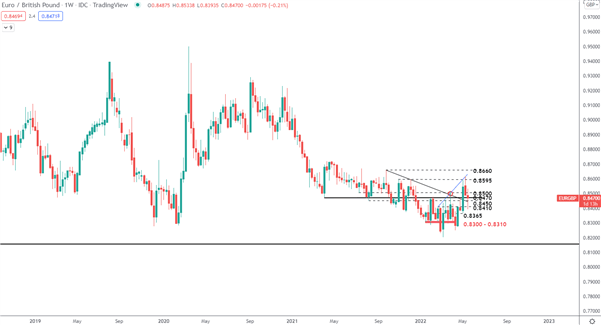 IG Client sentiment is a powerful indicator in strong trending markets. The EUR/GBP pair, however, has traded all over the place and exhibits very choppy price action – reducing the effectiveness of sentiment analysis. 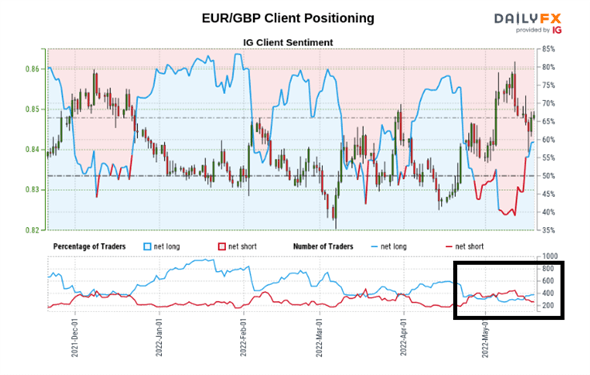