Yesterday saw an address from Christine Legarde as a virtual ceremony and interview of Philip Lane, economist and member of the executive board of the ECB.

Legarde was overseeing the transition of the outgoing and new president of the Bundesbank when she made reference to the bank’s commitment to price stability and acknowledged the concern people may have surrounding rising prices – re-emphasizing that price stability is “critical for the firm anchoring of inflation expectations and for the confidence in the currency”.

However, economist, Philip Lane, when interviewed made reference to the fact that despite December’s hot inflation print that the bank foresees inflation falling in 2022 with inflation dropping below the 2% target in 2023 and 2024.

EUR/USD Snapshot Ahead of US CPI Data

In the lead up to US CPI data print, EUR/USD has been rather calm with very little movement witnessed in the pair this on the day.

In fact, Justin McQueen’s US CPI preview revealed that the Euro breakeven straddle was only at 42 pips – meaning that EUR/USD is expected to move in either direction by 42 pips.

To put that into context, the average true range (ATR) experienced in EUR/USD over the last fortnight reads 55 pips, meaning that the expected move from US CPI is less than the typical daily average move in the pair over the last two weeks.

The 4-hour chart reveals the 1.1350 level as one to watch. It has operated as prior resistance but now has turned into the most immediate level of support. In the event of a significant surprise in US inflation data, there is a slight chance of USD appreciation which would highlight the lower bound of the ascending channel with the next level of support (1.1168) still some distance away. The rather apprehensive take on USD appreciation stems from a view that most of the Fed’s hawkish posturing has already been reflected in the price.

However, a data print more or less in line with the estimate (7%), could see the pair climb steadily towards 1.1400 once the dust settles. The once ultra-dovish European Central Bank and its members have in recent months turned rather hawkish in response to soaring Eurozone inflation. With this in mind, the Euro could see the start of a reprieve from the long term downtrend which may see it somewhat supported. 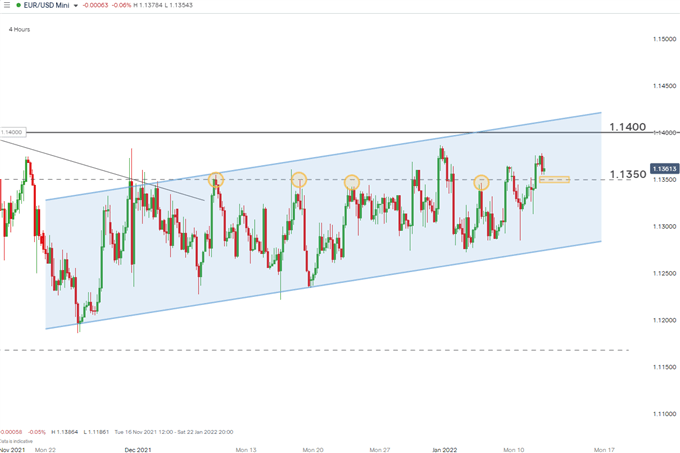 USD/TRY, USD/ZAR, USD/MXN Key Levels Forecast for the Week Ahead