The EUR/USD rebound following the US Non-Farm Payrolls (NFP) report appears to be stalling ahead of the European Central Bank (ECB) interest rate decision as the exchange rate struggles to extend the series of higher highs and lows from the monthly low (1.2104).

EUR/USD seems to be stuck in a narrow range despite the upward revision in the Euro Zone Gross Domestic Product (GDP) report, and the exchange rate may continue to consolidate ahead of the ECB meeting as the central bank appears to be on track to retain the current course for monetary policy.

It seems as though the ECB is in no rush to switch gears as President Christine Lagarde offered a dovish guidance following a Eurogroup meeting from earlier this month, and the Governing Council may continue to support the Euro Area as the monetary union faces a technical recession.

In turn, the ECB may stick to the same script as “the outlook for both growth and inflation remained dependent on the support of fiscal policy measures and the very accommodative monetary policy,” and more of the same from President Lagarde and Co. may spark a bearish reaction in EUR/USD if the Governing Council stays on track to increase its purchases under the pandemic emergency purchase programme (PEPP) “at a significantly higher pace than during the first few months of the year.”

At the same time, a less dovish forward guidance may fuel the recent rebound in the Euro as the Governing Council insists that “the future pace of purchases under the PEPP was data-dependent and would continue to be based on the joint assessment of financing conditions and the inflation outlook,” and the tilt in retail sentiment may persist following the ECB meeting as traders have been net-short EUR/USD since April. 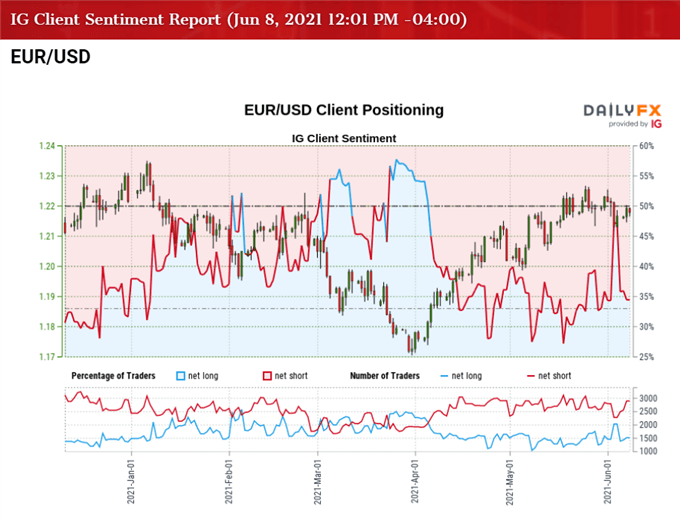 The IG Client Sentiment report shows 38.50% of traders are currently net-long EUR/USD, with the ratio of traders short to long standing at 1.60 to 1.

The number of traders net-long is 5.13% higher than yesterday and 9.78% higher from last week, while the number of traders net-short is 0.42% higher than yesterday and 4.78% lower from last week. The rise in net-long position has helped to alleviate the crowding behavior as only 37.51% of traders were net-long EUR/USD last week, while the decline in net-short interest comes as the exchange rate extends the rebound from the monthly low (1.2104) following the NFP report.

With that said, it remains to be seen if the decline from the January high (1.2350) will turn out to be a correction in the broader trend rather than a change in EUR/USD behavior as the crowding behavior from 2020 resurfaces, and the exchange rate may continue to consolidate ahead of the ECB meeting as it struggles to extend the recent series of higher highs and lows.

A to Z Crypto: Demystifying the Top Cryptocurrency Jargon

S&amp;P Stirs Near Highs, Russell 2000 Breakout Ahead of Inflation, FOMC