The Euro has seen volatility continue to remain subdued as the US Dollar hits pause on its run higher. The market is set to shift focus from a hawkish Fed to the real economy, with jobs data due out in the US today.

According to a Bloomberg survey, the market is expecting a 447k change in non-farm payrolls for December against 210k from last month.

APAC equities have had a mixed session with Hong Kong’s Hang Seng index and Australia’s ASX 200 up over 1%. Japanese and Chinese mainland indices were little changed.

Another Chinese builder default was announced today. It comes at a time when the PBOC has surprised markets by reducing liquidity.

US futures are pointing towards a positive start to Wall Street at the time of going to print.

Crude oil made a 7-week high today with the WTI futures contract ensconced above USD 80 a barrel.

Higher oil prices come as tensions continue to mount between NATO and Russia, this time over events in Kazakhstan. With the northern winter about to bite, the geo-political brinkmanship over energy supply might play a larger role for markets going forward.

Alongside the upcoming US non-farm payrolls, Canadian jobs data will also be released.

This sideways movement between 1.11861 and 1.13860 has seen volatility collapse, as shown by the narrowing of the 21-day simple moving average (SMA) based Bollinger Band.

This range trading environment to start the new year appears to be well entrenched for now.

When market ranges tighten, the Bollinger Band might be a signal to watch for a volatility breakout. The initial break outside the 2 standard deviation band is a possible indicator of an emerging trend.

The 55-day SMA may offer resistance, currently at 1.13727, just above the upper Bollinger Band. 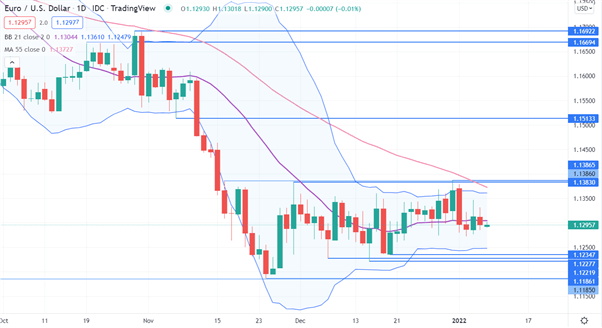