EUR/USD extends the rebound from the monthly low (1.1781) as the account of the European Central Bank (ECB) meeting highlights an improved outlook for the Euro Area, with the Relative Strength Index (RSI) offering a textbook buy signal as the oscillator bounces back from oversold territory.

EUR/USD retains the advance following the ECB Strategy Review as the minutes from the June meeting emphasizes that “real GDP was expected to exceed its pre-pandemic level in the first quarter of 2022, one quarter earlier than envisaged in the March staff projections,” with the Governing Council going onto say that “economic activity was expected to accelerate in the second half of the year as further containment measures were lifted.”

As a result, the ECB “acknowledged that incoming information and data had been favourable and bolstered confidence in the expected economic recovery,” but it seems as though the Governing Council is in no rush to switch gears as the central bank stays on track to “conduct net asset purchases under the PEPP (pandemic emergency purchase programme) over the coming quarter at a significantly higher pace than during the first months of the year.”

In turn, EUR/USD may stage a larger rebound ahead of the next ECB interest rate decision on July 22 as the central bank upgrades its economic outlook for the monetary union, but more of the same from President Lagarde and Co. may produce headwinds for the Euro as the Governing Council relies on its emergency tools to achieve its one and only mandate for price stability.

Until then, EUR/USD may stage a larger rebound as the RSI climbs above 30 to offer a textbook buy signal, but the weakness from the start of the month has spurred another shift in retail sentiment as the IG Client Sentiment report shows 54.53% of traders are currently net-long the pair as the ratio of traders long to short stands at 1.20 to 1. 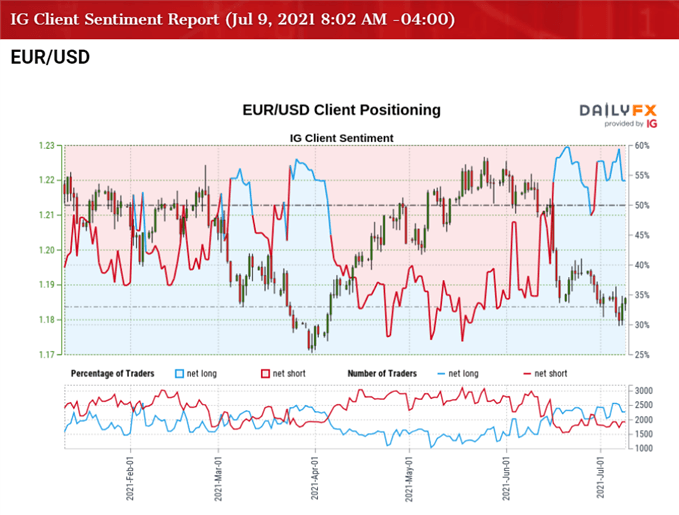 The number of traders net-long is 5.26% lower than yesterday and 0.04% lower from last week, while the number of traders net-short is 3.97% higher than yesterday and 1.35% lower from last week. The marginal decline in net-long position comes even as EUR/USD extends the series of higher highs and lows from the monthly low (1.1781), while the decline in net-short position has helped to spur a shift in retail sentiment as 48.74% of traders were net-long the pair at the end of June.

With that said, it remains to be seen if the decline from the January high (1.2350) will turn out to be a correction in the broader trend rather than a change in market behavior as EUR/USD trades below the 200-Day SMA (1.2001) for the first time since April, but recent developments in the Relative Strength Index (RSI) indicate a larger rebound in the exchange rate as the oscillator pushes back above 30 to offer a textbook buy signal.

US Dollar Forecast: Focus Now Shifts to CPI Data and a Slew of Fedspeak Ahead