There wasn’t much data for traders to digest on Monday, but suspicions that Eurozone borrowing costs will rise sharply keep the Euro supported

How to Trade EUR/USD

The Euro rose to fresh, nine-month peaks against the US Dollar on Monday with interest-rate differentials firmly in the driving seat.

Signs that inflation is relaxing its grip on the United States economy have investors hopeful that borrowing costs there might not have to rise too much more, and that any economic hit from them will be manageable.

Europe has no such comfort blanket. The Eurozone has in any case been more exposed than the United States to price rises stemming from the conflict in Ukraine. It has also, arguably, been slow to respond to these.

Finnish central bank chief Oli Rehn said last week that the European Central Bank must still raise interest rates ‘significantly’ in the coming months in order to dampen inflation, which has been far too high. Rehn sits on the ECB’s rate-setting governing council.

The ECB has increased its interest rates by a combined 2.5 percentage points since last July. Consumer price growth slowed in December to 9.2% from 10.1%, but ‘core’ inflation remains stubborn and rose again last month.

Whether the ECB can bring prices to heel without risking a damaging recession, especially in the weaker eurozone economies, remains a huge question, but, for the moment, the prospect of significantly higher rates keeps the single currency bid in a day lacking significant data cues.

Reuters reports that over 70% of analysts expect a 0.5 percentage point rise in February, with as many as 28% going for a three-quarter point increase.

EUR/USD has put in a run of gains since its slide below parity with the US Dollar in September of last year.

Euro bulls have pushed the pair up through the psychologically important 1.08 resistance on Monday but have yet to establish themselves above that level and may now be a little over-extended. 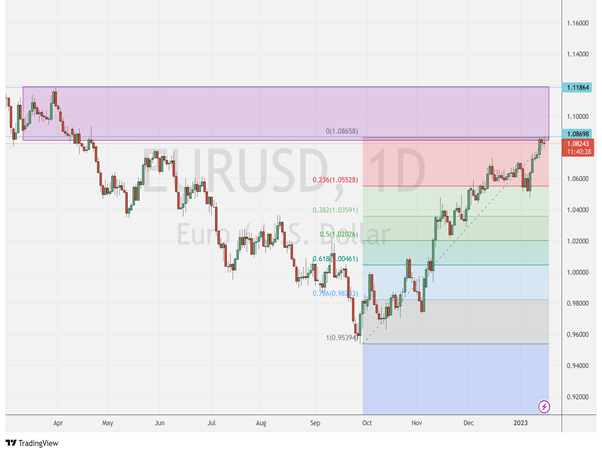 Prices are now edging into a trading band formed by last April 22’s peak of 1.08258 and Mar 29’s top of 1.11985, and the uncommitted may want to see if it can hold there on daily and weekly bases this week before considering the extent of further, near-term rises.

Reversals meanwhile are likely to find quite strong support at the first Fibonacci retracement level of the rise up from September’s lows. Right now that comes in at 1.05528 where, significantly, the pair bounced last week just before the current move higher.

IG’s own sentiment indicators suggest that progress may be hard-won from here. 62% of respondents declare themselves net short at current levels and, while sentiment can be fickle, combined with such strong gains already made, may suggest that consolidation, at least, is likely.

That said, if EUR/USD does consolidate above that retracement point, the overall picture will likely remain bullish.

–By David Cottle For DailyFX