Shanghai reported three consecutive days with no new coronavirus cases which suggests that strict lockdowns could soon be abolished or eased somewhat. Earlier this week Shanghai officials eyed the 1st of June as an appropriate time to start returning to normality however, one would imagine that the situation could change if there is a sudden uptick in new cases as China pursues a zero-Covid strategy.

It’s been a fairly rough few weeks for equities, particularly the Nasdaq and S&P500, resulting in markets welcoming the positive news which has resulted in a lift in sentiment and overall index prices. European indices march higher as the FTSE 100 and Germany’s DAX index experience a lift this morning.

Looking at the FTSE Index, all sectors apart from the healthcare sector advanced as basic materials and financials lead the way in the London AM session. Rising inflation and optimism around China’s renewed demand for commodities supported rises in oil and metals (silver, gold and copper). Notable mentions include Imperial Brands, Fresnillo and Prudential as the biggest movers while Unilever, Ocado and Next PLC are among some of the shares trading lower this morning.

FTSE Winners vs Losers This Morning

The FTSE 100 index has completed a strong turnaround since rejecting the 7220 level. Energy stocks have benefitted from oil’s recent rise while mining stocks benefit from the bullish turnaround in metals prices. 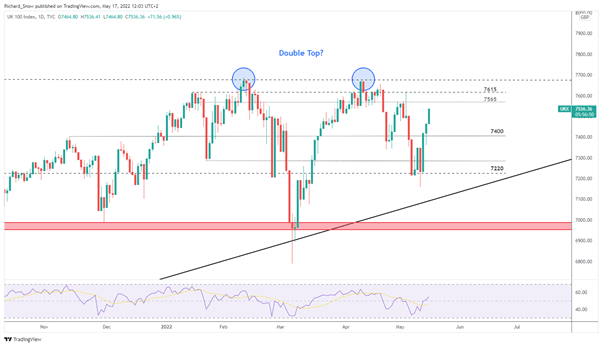 In the current global macro environment of runaway inflation, aggressive rate hiking cycles and a rising dollar; equities remain in a tough spot. Despite the FTSE’s strong relative performance due to a heavy weighting in energy and mining stocks, UK equities may simply be rising to attractive levels before we witness a continued decline in line with the ‘sell the rally’ sentiment. Declining growth forecasts for the UK also pose risks to the downside after the March GDP data showed a month-on month-contraction.

The DAX reveals a very interesting symmetrical triangle pattern which appears to be shaping up for a topside breakout. To avoid a fakeout scenario, any break above the descending trendline resistance may retest the same trendline before advancing towards 14600. Support appears at 13910 which is likely to witness price action trading within the triangle in the event of a failure to breakout. 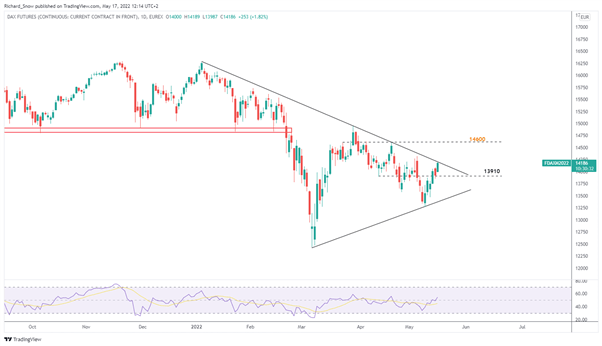 USD/JPY Rate May Fall on Disappointing US Retail Sales Data

US CPI Preview: How Will the US Dollar React?