That set of inflation data helped to push the US Dollar higher against most of its major peers. A stronger Dollar typically works against bullion prices. The Euro dove, driving much of the strength, likely due to Finland’s announcement that it intends to vigorously pursue NATO membership. That elicited a strong reaction from Russia, with the embattled country vowing to retaliate, which strengthened the risk-off tone that has been blanketing the Eurozone.

Traders will be watching several high-profile data prints this upcoming week that may influence XAU prices. The April print for US retail sales may hold the most sway over broader market sentiment. Analysts see retail sales growing at a 0.7% m/m clip for April, according to a Bloomberg survey. A stronger-than-expected figure may cool some fears over a looming contraction in economic activity. That would likely help to cool the US Dollar and perhaps allow gold to rise by removing some risk aversion from the markets, as the Dollar has been acting largely as a haven for traders.

Gold Versus US Dollar Weekly Chart 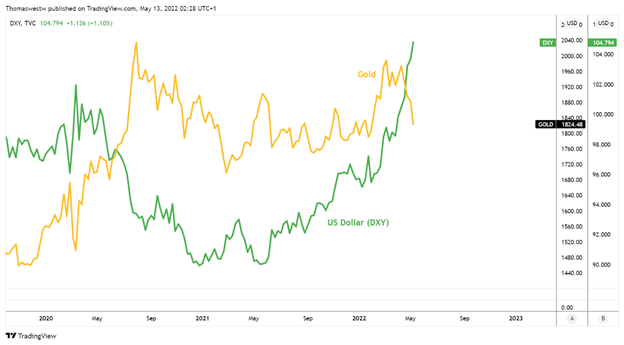