Gold prices collapsed during Monday’s Wall Street session as traders returned after a weekend of digesting the latest inflation data. Last Friday, the US consumer price index (CPI) reignited fears about persistent inflation, despite the Federal Reserve already hiking rates earlier this year. Markets are pricing in a solid chance for a 75-basis-point rate hike on Wednesday when the FOMC interest rate decision crosses the wires.

Friday’s 8.6% year-over-year CPI number saw gold initially react to the upside, likely owing to the asset’s appeal as an inflation hedge. However, bullion reversed those gains and then some as overnight index swaps and other market-based measures priced in the data. That caused a rush of selling in Treasury securities, particularly along the short-end of the yield curve, resulting in a stronger US Dollar and increased fears about a possible recession.

Also notable is the stunning surge seen in real yields. Gold, being a non-interest-bearing asset, is highly influenced by behavior of the Treasury market. Put simply, real yields are Treasury rates that account for inflation. The higher those rates go, the less appealing gold becomes to investors. The reaction in real yields will be a vital component of gold prices on Wednesday when the FOMC decision crosses the wires. 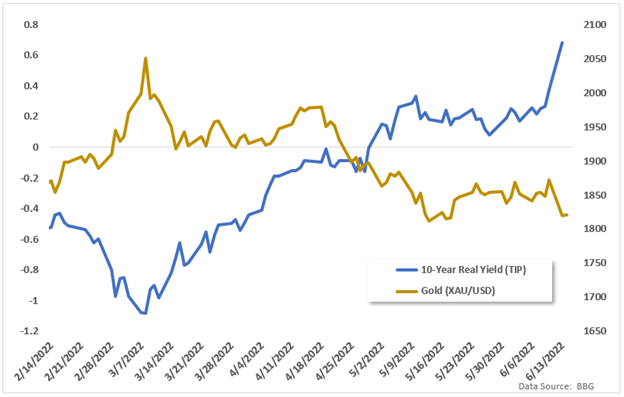 Gold prices are modestly higher through early Asia-Pacific trading after moving sharply lower overnight. The current move may be nothing more than a relief rally. If so, the move lower may resume shortly. The 1,800 psychological level serves as a prominent target for bears. A break lower would open levels not traded at since early 2022. The MACD crossed below its signal line, a bearish sign.