How to Trade the Impact of Politics on Global Financial Markets

Gold (XAUUSD) prices surged ahead this week reaching a high of USD1794.23, 6.7% off the yearly lows with a rebound off support. Bullion surged 1.5% on Thursday and is heading for a run of three straight weekly gains after China fired missiles over Taiwan during military drills. Beijing has responded aggressively to US House Speaker Nancy Pelosi’s visit to the island this week, the highest-ranking American politician to go there in 25 years.

Gold (XAUUSD) has benefitted from a weakening dollar, falling US bond yields and some haven support amid the ongoing geopolitical risks. Bullish comments from Federal Reserve officials pledged the central bank would continue an aggressive fight to cool soaring inflation. Loretta J. Mester, President of the Federal Reserve Bank of Cleveland said on Thursday that the Fed should raise interest rates to above 4% in order to bring inflation back down to target. These comments had little effect on the price of gold as haven demand persisted. 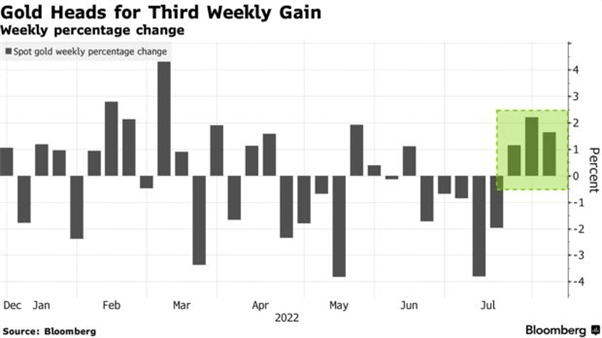 Surging US Job Growth Threatens to Derail the Bullion Rally

US employers added more than double the number of jobs forecast, illustrating rock-solid labor demand that tempers recession worries and suggests the Federal Reserve will press on with steep interest-rate hikes to thwart inflation. Treasury rates spiked higher on bets that the Fed will continue raising borrowing costs aggressively to cool demand and tame rampant inflationary forces.While strong hiring conditions may lead the Fed to press ahead with plans to front-load hikes, they should ease worries that the economy is headed overa cliff. This may help stabilize risk appetite in the near term leading to haven demand softening and gold prices declining.

With the Fed confirming its affinity for data dependent decisions we will get a better picture of the inflation profile next week when the U.S. Bureau of Labor Statistics releases the July consumer price index. CPI is seen rising 0.3% month-over-month, which the annual rate is expected to fall to 8.9%, from 9.1% in the previous month.

The fallout from US House Speaker Nancy Pelosi’s visit to Taiwan kept markets on edge for most of the week. Anxiety eased somewhat after the trip ended, however China has since started military drills in areas surrounding the island. China fired 11 Donfeng ballistic missiles into waters surrounding Taiwan in the biggest test in decades. China’s Foreign Ministry announced new countermeasures against Washington on Friday, including the suspension of climate talks, cooperation on the repatriation of illegal immigrants, legal assistance on criminal matters and the combat of transnational crimes. Should we see a continued escalation of tensions we could see haven demand grow even stronger with bullion likely to be one of the major winners. 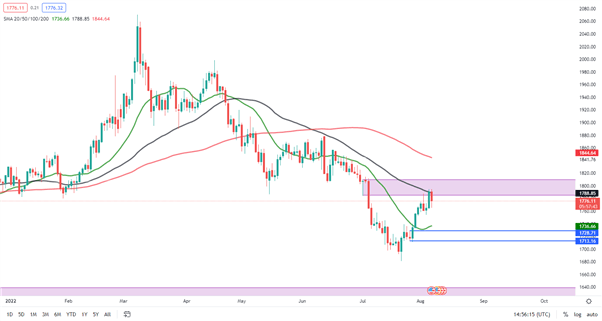 Final Thoughts and the Week Ahead

The market reaction following the NFP jobs report saw an immediate decline of USD26 on XAUUSD from around USD1790 to USD1764 before rallying higher once more. The 50-SMA provided resistance while we trade between the 20– and 50-SMA. The daily candle looks set to close as an inside bar bearish candlestick which would hint at further downside as we begin the new week while the USD1800 key psychological level rests just above this week’s highs.

As investors and more importantly the US Federal Reserve continue to closely monitor data and sentiment seems to shift after every release at the minute, next week’s inflation data is set to show inflation still at uncomfortably high levels. Should this be the case we could see a resurgent dollar which could lead to further downside for the precious metal.

— Written by Zain Vawda for DailyFX.com

S&P 500, Nasdaq Range-Bound as the US Dollar Jumps