Gold prices finished the week around 1.5% higher after prices rallied on Friday as Treasury yields moderated. Traders digested inflation data via the consumer price index (CPI) and producer price index (PPI) throughout the week, with both gauges cooling from the prior month. Federal Reserve rate hike bets eased following the 8.5% y/y CPI print, pushing yields lower. The rate-sensitive US Dollar fell through the week.

Confidence in quickly waned after the initial CPI reaction. Fed members, including San Francisco Fed President Mary Daly and Minneapolis Federal Reserve bank President Neel Kashkari, pushed back on the dovish fervor. In a Financial Times interview, Ms. Daly said, “There’s good news on the month-to-month data that consumers and business are getting some relief, but inflation remains far too high and not near our price stability goal.”

Gold-sensitive nominal and inflation-indexed yields finished the week slightly higher across much of the curve, despite a renewed appetite for Treasuries on Friday. The University of Michigan consumer confidence survey showed that short-term inflation expectations cooled. The 1-year inflation expectation fell to 5.0% from 5.2%, likely driven by the decrease in gasoline prices.Gold doesn’t provide interest, making government bond yields an influential factor in its price.

US equity traders, likely driven partly by a fear of missing out at this point, pushed the Nasdaq-100 Index (NDX) to its highest level since April. The Fed’s patience with ardent equity traders may be running short as higher stock prices ease financial conditions in the economy—which is the opposite of Mr. Powell’s goal. The Fed chief may remind markets of that goal later this month at Jackson Hole. The impact on bullion prices would likely be a negative one.

A normalization in short bets against XAU may bring another headwind to prices. According to CFTC data, short positions against gold among speculators hit the highest level since November 2018 for the week ending July 26. By August 2, as gold prices rose, those short bets fell 23.3%, helping to fuel further gains as traders bought back those borrowed contracts.

The Commitments of Traders (COT) report for the week ending August 9 showed yet another, although smaller decrease and total shorts have returned to relatively normal levels. With short covering slowing and the Fed pushing back against the pivot narrative, the gold rally faces a tough path higher. US retail sales data for July and the FOMC Minutes due August 17 will provide markets with additional data likely to influence gold prices. 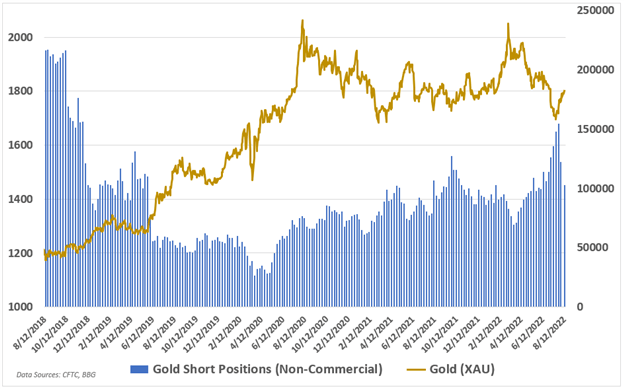 Euro Latest – EUR/USD Back Above 1.0900 on Further Hawkish Commentary