How to Trade Gold

Gold prices slipped on Tuesday, perhaps thanks to very modest gains for the United States Dollar, but the metal remains well bid. It has gained about 20% since last November on hopes that US interest rate rises may be coming to an end.

Rising rates and the higher risk-free yields they bring tend to weigh on non-yielding assets like gold. We saw this towards the end of 2022 as fast-rising interest rates took prices down to near $1,600/ounce in September.

There’ve been big changes since, however, with US inflation expectations relaxing. Another quarter-percentage-point rate rise is expected from the Federal Reserve next month, with just one other increase of the same magnitude priced into markets. Compared to the four-and-a-quarter percentage point hike seen over the course of 2022, that’s chicken feed and the US Dollar has duly struggled. Other central banks are expected to continue tightening policy aggressively even as the Fed tails off, burnishing the attractions of their currencies against the greenback, and making gold a more tempting investment in US Dollar terms.

Indeed, Reuters reported this week that gold prices are expected to rise back toward their record highs above the psychologically critical $2000 level this year, barring a major change in the US inflation picture. As a reminder, the highest ever recorded price for gold in US Dollars is $2077.88. That peak was scaled on August 7, 2020.

For now, gold bulls are attempting to hold on a little lower down, above $1900, but their near-term ability to do so may be hampered by their very success. The market has charged higher since November and, even if it can go still higher in the medium term, it may be ripe for some consolidation now.

IG traders are still broadly split on market direction, with 55% still bullish but a significant 45% expecting prices to slide. 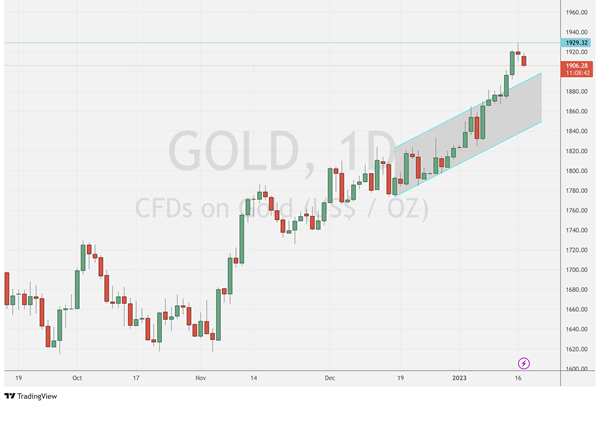 Gold touched levels not seen since April 25, 2022 on Monday, but wasn’t inclined to spend very long at that peak. Prices have run significantly above the uptrend channel which had previously been in place since December 20 and which itself was merely an extension of the up move seen since November 22.

Consolidation is likely to bring prices back down into that channel, whose top now lies around $1892/ounce. The base comes in at $1842 and, as long as any consolidation respects those boundaries, then the bulls probably have little cause for serious concern.

This week’s top of $1929.32 was around where the market hovered between March and April last year and that region is probably going to need to be taken a lot more definitively before the market can confidently move higher.

–By David Cottle For DailyFX

How to resurrect the ‘Metaverse dream’ in 2023