Gold appears to have halted the bearish trend after yesterday’s impressive turnaround, which has continued into this morning and now trades above the 200 day simple moving average.

Gold’s rise has coincided with a lower move in bond yields, particularly the US 10-year yield. Bond yields and bond prices move inversely to each other and therefore the lower yield was the result of a flight towards bonds, bidding up the price. 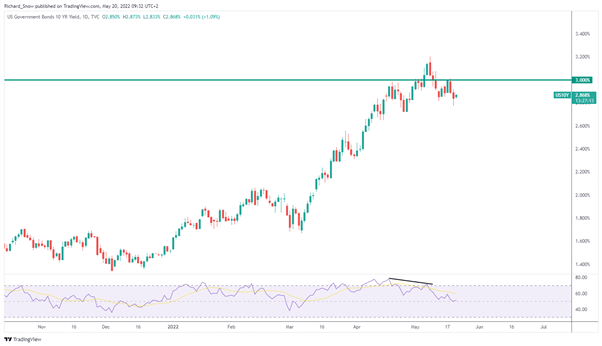 The move to safety has been prompted by rising recession concerns as US GDP is estimated to reveal a contraction in Q1. Earlier this week retail giant Target reported a 52% drop in profits citing supply chain issues and rising labor and fuel costs. Similarly, on Tuesday Walmart also made mention of poor consumer spending as a result of inflationary pressures which sees the share trade around 20% lower from the Monday close.

These are worrying signs considering the retail and wholesale industry tends to be fairly robust throughout economic cycles. Another contributory factor in gold’s recent lift is the softer US dollar. The dollar has strengthened massively in the lead up to the Federal Reserve stepping up the urgency to hike rates since the lift-off in March of this year.

Looking at the benchmark for dollar performance, the US Dollar Basket (DXY), we have seen a pullback from the bullish trend, providing a reprieve for USD crosses. The latest decline in DXY is the largest since Jan/Feb this year and needs to be monitored for a potential head and shoulders pattern (long-term bearish reversal pattern) which can be monitored for bearish confirmation. 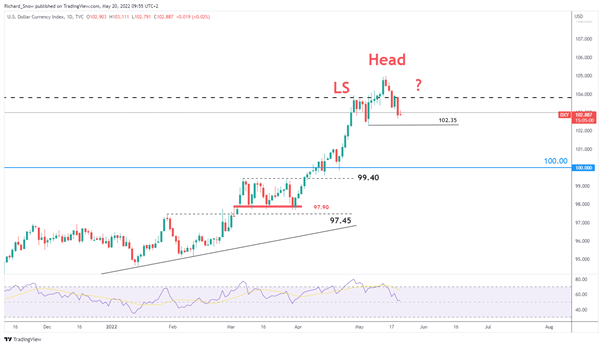 Despite gold’s shorter-term rise, the fundamental outlook remains bearish. Rising real yields increase the opportunity cost of investing in the non-interest yielding yellow metal and global markets have come to terms with a long-lasting war in eastern Europe. Risks to global growth also dampens demand for the metal used in industrial applications. From a yield perspective, keep an eye on rate hike expectations for initial clues on a potential slow-down in the pace of future Fed rate hikes which could benefit gold. However, despite rate hikes into year-end dropping below the additional 200 basis points to around 195, the move lower is negligible as it remains in the typical range. If recession risks pick up, we could see a change in tone by the Fed much like we witnessed with the BoE – which revised it’s guidance on rate hikes lower.

Gold rising above the 200 SMA helps provide support to the idea that the recent lift may continue. For that to be the case, XAU/USD would need to rise above 1854, and 1878 as these levels provide immediate resistance on the way to the pre-war 1908 level. Much of gold’s price action will be determined by moves in yields into next week. 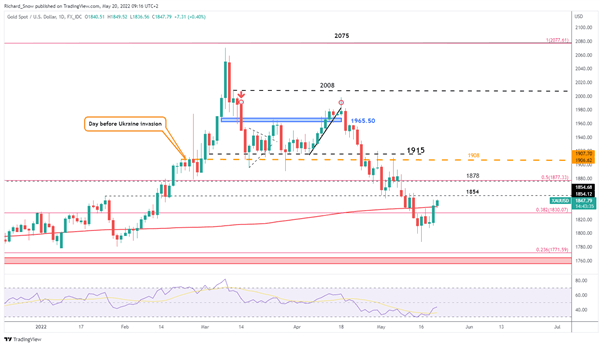 The Most Volatile Currency Pairs and How to Trade Them