Japanese core machine orders came in at -4.6% month-on-month for September instead of

Later in the day, the Ministry of Finance (MoF) Japan tertiary industry activity index came in at -0.4% against the 0.6% expected and 0.7% prior.

Today’s data is on the back of Monday’s shocking decline in Japan GDP for 3Q and yesterday’s slide in industrial production.

USD/JPY has clawed back above 140 and the ‘big dollar’ is generally firmer across the board through the Asian session today.

In North American trade, US PPI came in soft, printing at 0.2% month-on-month in October rather than 0.4% anticipated and prior. The year-on-year rise in prices faced by producers to the end of October was 8.0% instead of the 8.3% forecast and 8.5% previously.

This seemed to add to speculation that the Fed may become less aggressive in the rate hike cycle next year which led to bond buying, suppressing yields. The benchmark 10-year note yielded as low as 3.76% in the aftermath, the lowest return in 4-weeks.

After PPI, reports came through of an explosion of a missile in Poland near the Ukraine border. This raised concerns about an escalation in the Ukraine war and the consequences for oil and energy production in general.

Media reports pointed the finger toward Russia, but this has not been confirmed by the White House so far. Moscow has denied any involvement and described the explosion as a deliberate provocation aimed at escalating the situation.

This geopolitical concern appeared to have supported the US Dollar.

Wall Street finished in the green but the uncertainty around Ukraine has futures pointing to a benign start to their day ahead. APAC equity indices are a sea of red going into their close.

Crude oil and soft commodities were lifted on concerns that supply from the war region could be further hampered.

The WTI futures contract is trading over US$ 86 bbl while the Brent contract is a touch above US$ 93 bbl. Gold remains steady near US$ 1,770 an ounce.

After UK CPI today, Canada will also get CPI and the US will see data on retail sales, housing starts and mortgage applications.

USD/JPY has moved down into the Ichimoku Cloud and a move under it could signal an end to the bullish run. It may indicate a possible bearish trend unfolding. 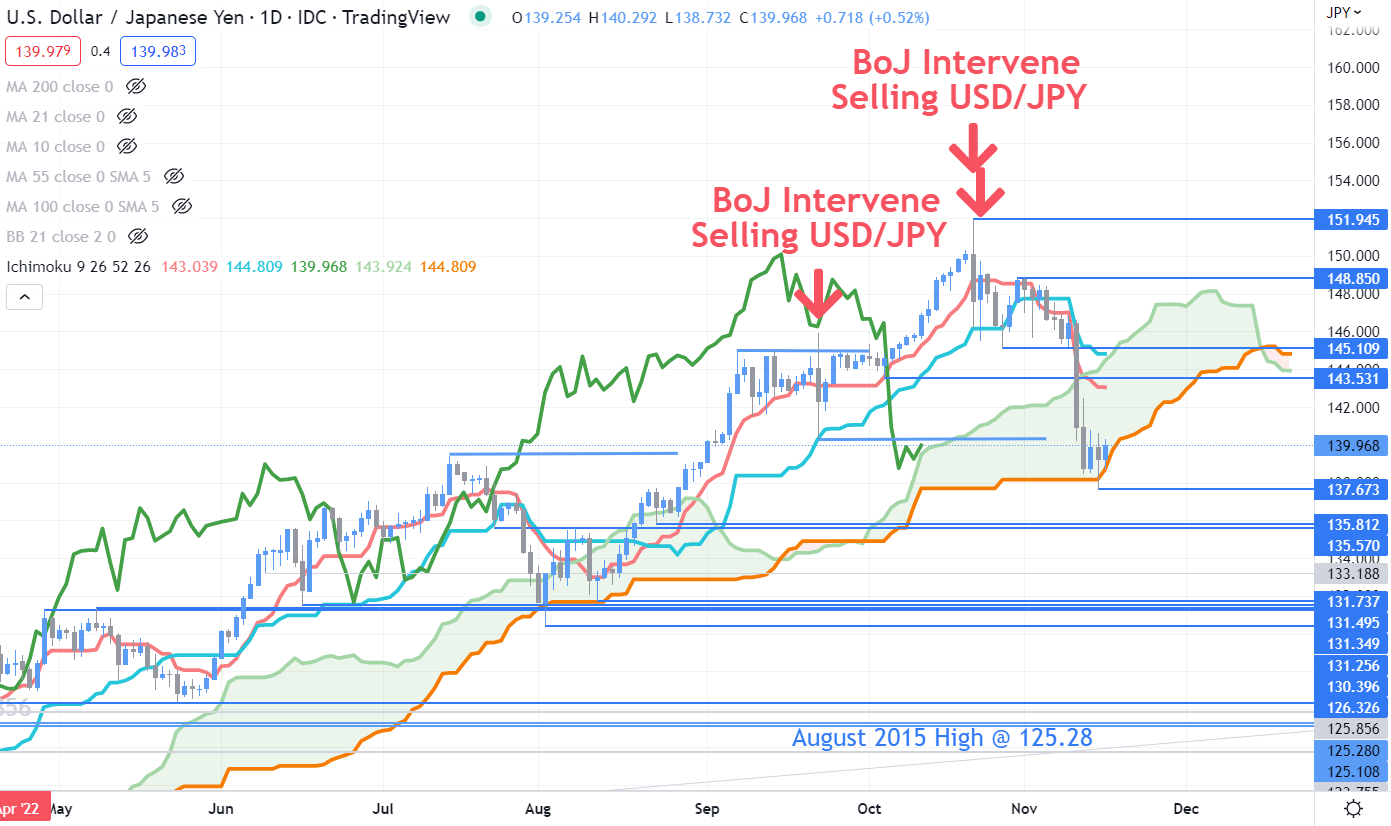 FTX hacker is now the 35th largest holder of ETH

Japanese Yen Under Pressure as USD/JPY Climbs After Jackson Hole, Will Nikkei 225 Slump?