As many had expected, seasonal conditions would ultimately have their way with the markets heading into the known liquidity drain that is the US Thanksgiving holiday period. Despite the presence of some closely-watched fundamental events (the OECD economic forecasts, November PMIs and FOMC meeting minutes among others), the suppressed levels of liquidity would not inadvertently leverage serious volatility in the main capital markets. Through the rest of the holiday trading week, there will be a significant escalation in the restriction of participation; but that shouldn’t be considered reliable evidence that the markets are going to be wholly contained to neat ranges. Shallow conditions can generate serious, short-term waves. That said, so long as there are no major and unexpected headlines from world’s largest financial centers; we will likely be shifting our expectations for systemic developments out into the new trading week. The S&P 500 – as a leading measure of sentiment – will kick off the return of liquidity after its narrowest 9-day trading range since January. The barriers on this restrained technical span roughly align to the 200 and 100-day simple moving averages…to make monitoring easier from the less technically-inclined. 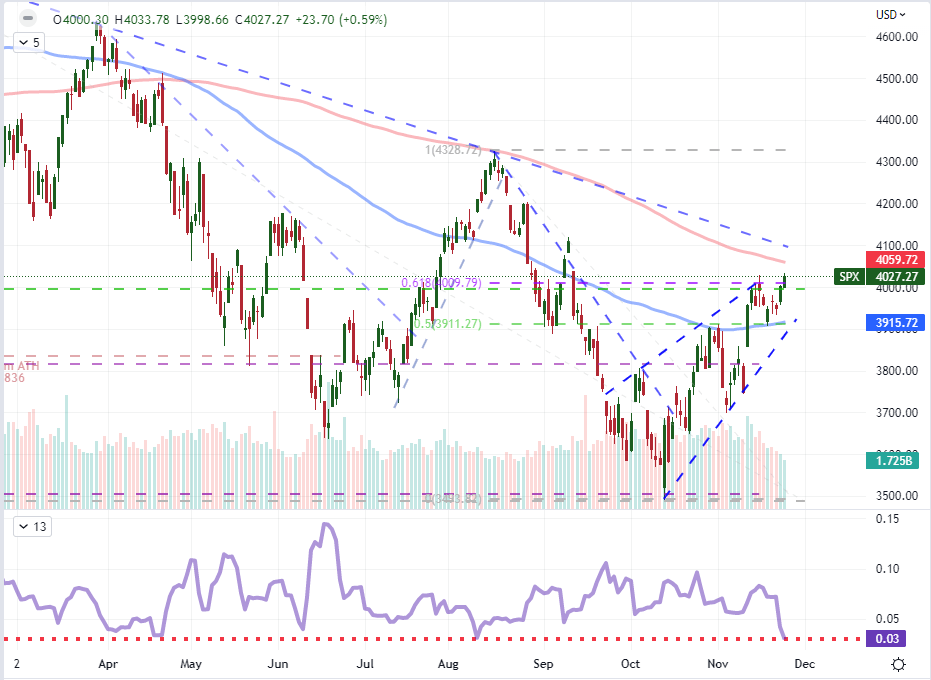 As we look into the new trading week with the expectations of post-holiday liquidity and a significant upgrade in the tempo of scheduled event risk, I think it is important to reflect on the state of complacency in the market. There are many ways to measure the market’s ‘sitting duck’ syndrome, but the most ubiquitous VIX index presents the accessible measure with an exceptional level of aloofness. The so-called ‘fear index’ dropped six consecutive trading sessions through Wednesday’s close as it closed in on a well worn wedge low around the 20 handle. This is not a historically extreme low in the VIX, but it does register as a relative nadir that has previously sourced a turn in expected (implied) volatility as well as some notable turns for the underlying capital markets (the S&P 500 as the foundation here). Generally, these seem to be exceptionally low levels given the concerns around recession risks, and not even the ‘holiday trading conditions’ would justify tuning out on risk exposure at this juncture. 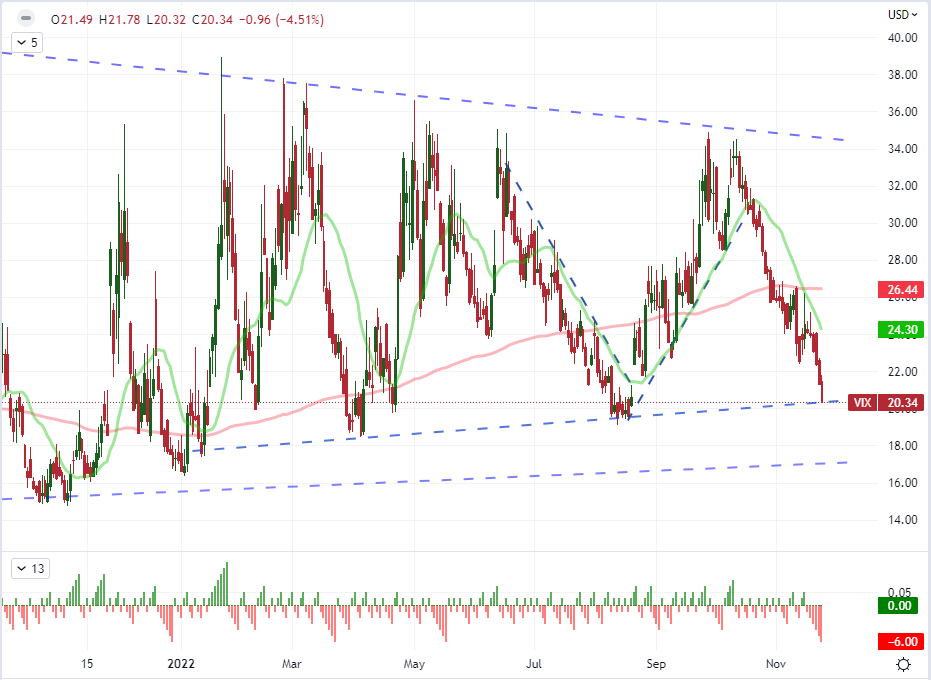 While liquidity will play a critical role in the market’s ability to generate significant traction in the week ahead, top scheduled event risk will play an outsized role in our eventual activity levels. There are unresolved, systemically-important economic threats in the open market that can be readily provoked by high-level scheduled event risk. In general, I’m monitoring fundamental updates – both scheduled and unscheduled – that speak to monetary policy developments and recession risks. That said unforeseen financial disruptors should be considered a possible risk out of hand. Developments like the Russian invasion of Ukraine, UK ‘mini budget’ debacle and FTX crypto implosion are distinct events thus far in 2022; and they are unlikely to be the last of the unpredictable developments we encounter moving forward. The unpredictable aside, there are very real and known threats in recession risks and monetary policy pressure. On the former consideration, this past week offered the OECD’s warning that the 2023 outlook for economic activity was looking increasingly cool and dependent on expansion from the likes of China and India. The evidence of a tip from throttled economic expansion into outright contraction seems to be a formality of lagging data, but the market seems to still be living on a sense of hope. 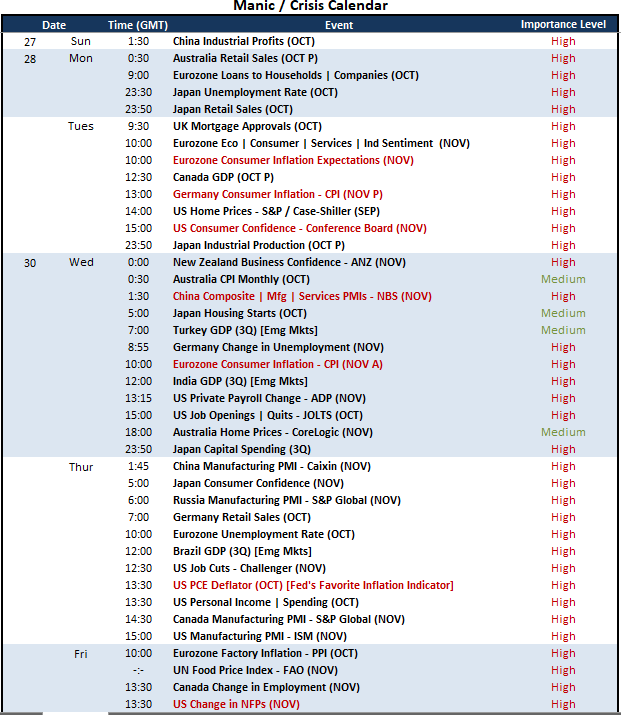 For markets at the crossroads of key fundamental trends, there seem few more exposed measures than EURUSD. That is not to mean that this exchange rate is due a clear bearing and productive trend. Reality tends to cater to exactly the opposite outcome when the scheduled event risk is dense. When there is scheduled event risk from both sides of the pair that tends to ‘beat’ or ‘miss’, the impact can be more or less an offset in realized price action. From the Euro side of the exchange rate, the Eurozone’s consumer inflation indicator (CPI) and unemployment rate will be a critical weigh in on an economy that the OECD warned was at exceptional risk in 2023 and given the ECB has been urged to ‘close the gap’ with the Federal Reserve. Meanwhile, the Dollar will be prompted by a combination of event risk in the Conference Board consumer confidence survey, PCE deflation (the Fed’s favorite inflation reading) and November nonfarm payrolls for a comprehensive read on the prime fundamental concerns of the world’s largest market. 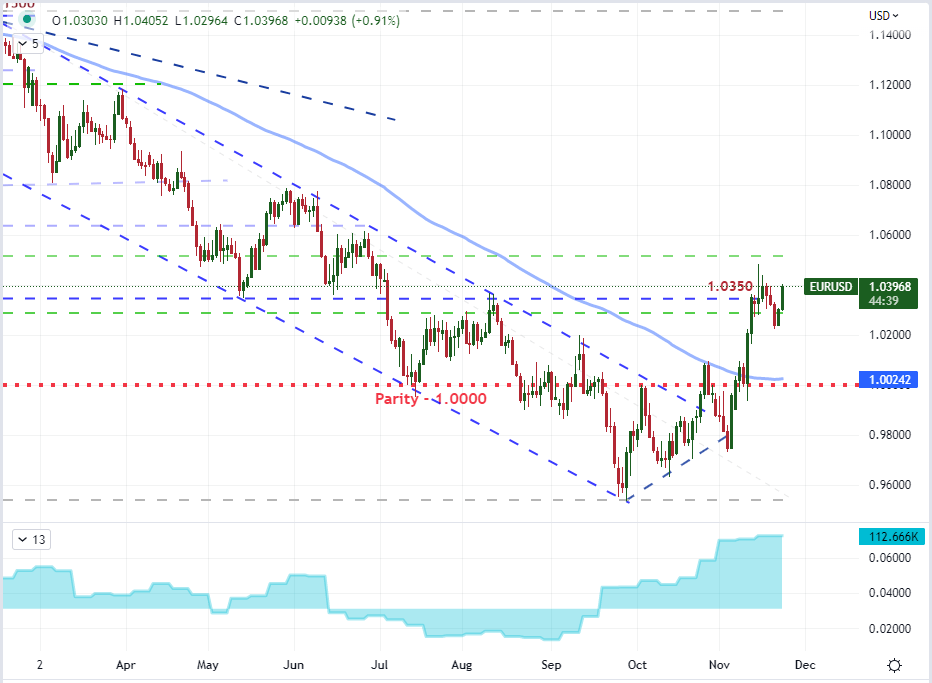 Discover what kind of forex trader you are

Crypto has survived worse than the fall of FTX: Chainalysis