USD/MXN has seen its price decline for a third consecutive week and is now just shy from the 20 pesos mark for the first time since February 16th. The pair was able to break below the 76.4% Fibonacci support level (20.18) as figures released on Thursday saw Mexican inflation continue to overshoot the 3% target send by Mexico’s Central Bank (Banxico).

The 4.67% year-on-year reading is showing that consumer prices are growing faster than expected, which in turn signals possible economic recovery from the Covid-19 pandemic crisis. A breakdown of the data shows that the rise was mostly led by higher energy prices, although travel and tourism prices also rose due to the Easter holiday. The rest of the economic data released this past week was also heading in the right direction. 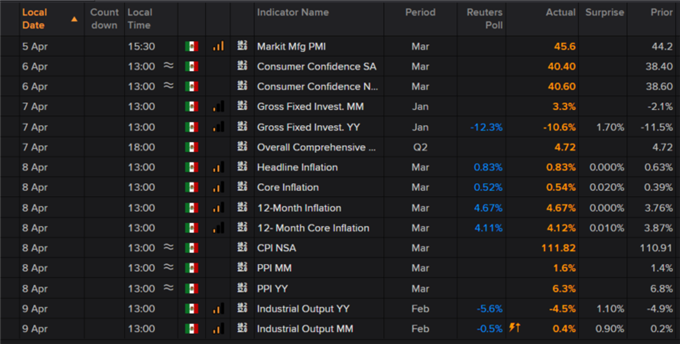 But Banxico’s meeting minutes released on Thursday evening offered a note of caution, stating that the recent pause in the easing cycle – the bank left rates unchanged at 4% in March – is not the end of the road and the bank will be looking for any signs that the cycle should resume. The minutes underpinned that domestic economic activity decelerated in January and February, with most members attributing this to a spike in the pandemic, the implementation of new mobility restrictions, and supply disruptions of certain products.

The descending trendline from the highs seen last month is still the dominant theme at the moment so I expect USD/MXN to continue drifting lower in the next few sessions – that is always in absence of a catalyst. The US Dollar weakness over the last few days looks set to continue if the Dollar basket is able to break below 9200, so this could aid the Mexican Peso bulls in getting the pair below the 20 pesos mark, and more importantly the 19.87 horizontal resistance line.

Euro Forecast: EUR/USD Outlook Tilted to the Downside in Week Ahead

US Dollar (DXY) Outlook Looks Weak But For How Much Longer?