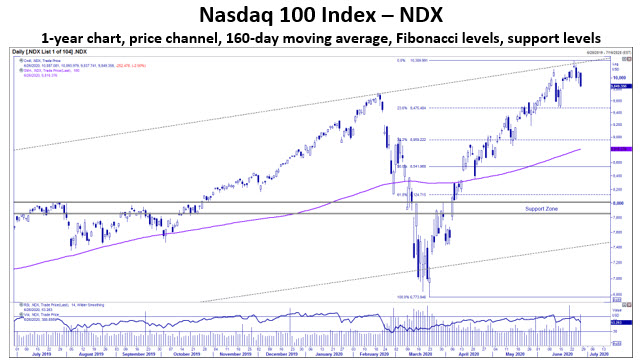 In an unusual turn of events, the tech-heavy Nasdaq 100 lags the Dow Jones this week following news that a coronavirus vaccine may be on the horizon. Offering a boost to corporations with more traditional business models, investors have shied away from technology stocks which sparked a quick reversal in the Nasdaq following Monday’s surge. That being said, the pullback may serve as healthy consolidation as the index ponders its next move and it has already begun to catch up to the DJIA.

Monday’s Biggest Losers Were Those That Benefited During Pandemic

In the meantime, the Nasdaq 100 may derive influence from nearby technical levels. To the topside, initial resistance might reside from 12,045 to the descending trendline slightly higher, perhaps around the 12,090 mark. This area has already displayed some ability to influence price, evidenced by the indecision around the zone late last week when price attempted to move higher.

Should price press higher still, subsequent resistance might arise along the horizontal lines of the various highs from September, October and November. These stand at 12,466, 12,253 and 12,415 respectively.

On the other hand, the Nasdaq 100 might seek out support should weakness in the technology sector persist. As evidenced by the bounce in Tuesday’s session, initial support likely resides around the 11,570 to 11,540 zone. If it fails, secondary support may rest at the Fibonacci level near 11,360 and the band of support slightly beneath, around 11,200.

With the Nasdaq treading water between support and resistance, shorter-term directional trades are not particularly attractive in my view – at least at this time. That said, I would argue the fundamental landscape is conducive to further equity gains, so the medium-term outlook is encouraging – even for the Nasdaq which has lagged this week.

Thus, future pullbacks or deeper retracements might bring in the potential for long exposure as long as the September and October lows are not pierced. Should they fail, it might constitute a reassessment of the technical outlook. Aside from that, shorter-term price moves may serve only as healthy consolidation before the next move. In the meantime, follower @PeterHanksFXon Twitter for updates and analysis.

Implied Volatility: What is it &amp; Why Should Traders Care?

Malaysia has triumphed in FX reforms – but what comes next?