The New Zealand Dollar was little changed after reports crossed the wires that Jacinda Ardern, New Zealand’s Prime Minister, announced that she would step down by February 7th. She also called for an election on October 14th. While that may introduce some near-term political uncertainty for NZD/USD, the sentiment-linked currency likely remains focused on external matters.

NZD underperformed against its major counterparts on Wednesday. This followed a notable deterioration in risk appetite during the Wall Street trading session. By the end of the day, the Dow Jones, S&P 500 and Nasdaq 100 fell -1.81%, -1.56% and -1.24%, respectively. This is as the VIX market ‘fear gauge’ rose about 5%.

This followed a slew of disappointing US economic data. Retail sales clocked in at -1.1% m/m in December, worse than the -0.9% consensus. Meanwhile, PPI final demand printed 6.2% y/y for the same month. That was much lower than the 6.8% estimate. This continued to show signs of a cooling economy and placed the focus on the Federal Reserve.

The 2-year Treasury yield sank to 4.09%, the lowest close since September 2022. Markets continued pricing away Fed rate hikes for this year. Now, Fed Funds Futures indicate that traders anticipate only 32 basis points in tightening this year. That means one more hike at the next meeting with the odds of a second rapidly diminishing.

Instead of traders looking forward to a dovish pivot, price action over the past 24 hours indicated that the greater fear was of a more pronounced economic slowdown that would indicate more trouble ahead. Stocks fell, traders bought up bonds which brought down yields and the risk-linked New Zealand Dollar took a drip.

This is leaving NZD/USD vulnerable to more downside heading into Thursday’s Asia-Pacific trading session. The sour tone set by Wall Street might make its way into regional bourses, pressuring indices like the Nikkei 225, ASX 200 and Hang Seng Index. Haven seeking would open the door for the US Dollar to potentially pull ahead.

On the daily chart, NZD/USD has left behind a Shooting Star candlestick pattern. This is a sign of indecision as prices tried to push into the 0.6463 – 0.6576 resistance zone. While this doesn’t mean that a turn lower is in the cards, downside follow-through could open the door to a reversal. But, keep a close eye on the 50-day Simple Moving Average (SMA). It could hold as support, pivoting prices higher. 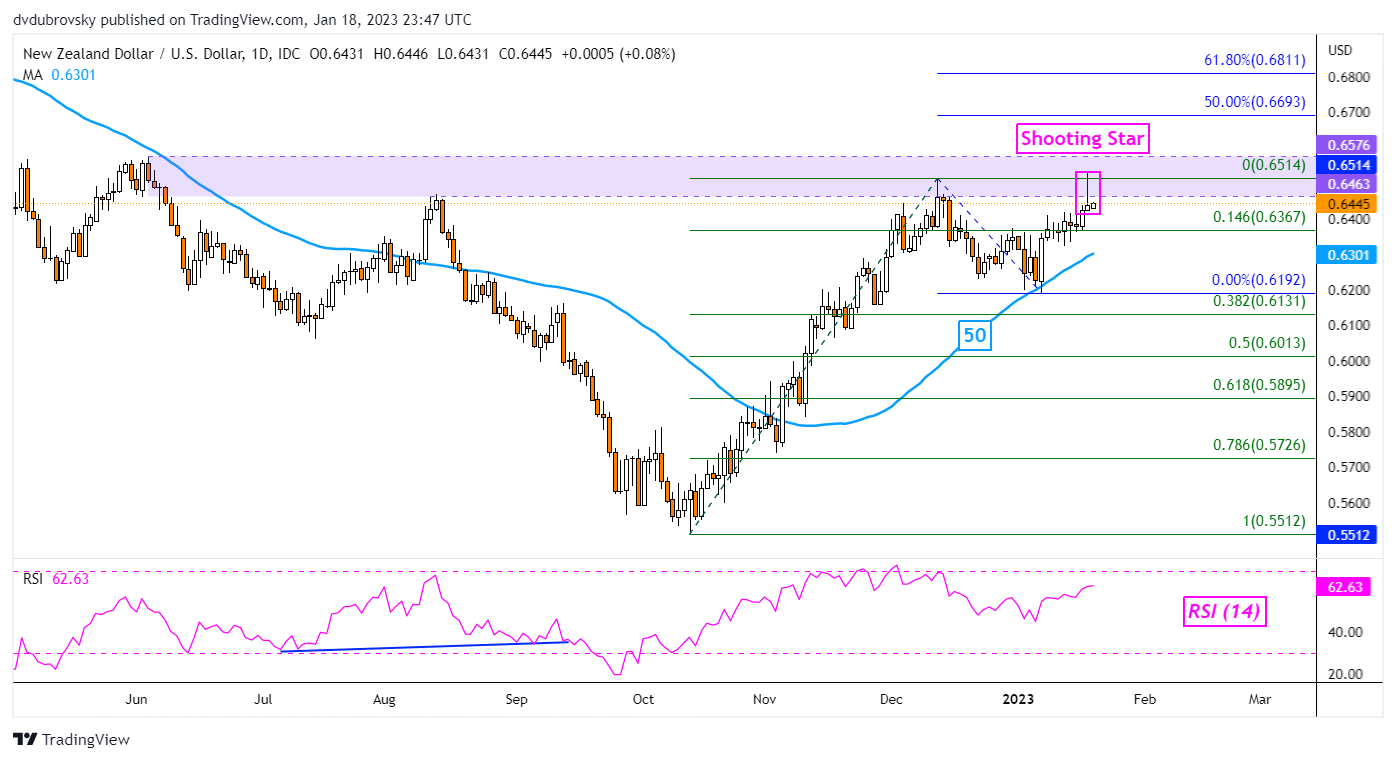 Ethereum price rally under question after ETH slams into resistance at $1.6K

Australian Dollar Dipped After Slight Miss on Jobs Data. Where to for AUD/USD?