In a letter published to shareholders, Ackman highlighted the regulatory concerns that plagued the proposed deal. “Our decision to seek an alternative initial business combination (“IBC”) was driven by issues raised by the SEC with several elements of the proposed transaction – in particular, whether the structure of our IBC qualified under the NYSE rules…” said Ackman. Since the announcement of the merger, shares of Pershing Square Tontine Holdings have shaved nearly 20%. As a result of the SPAC merger falling through, Ackman’s Pershing Square hedge fund will now acquire a 5-10% stake.

The failed deal comes as new SEC Chair Gary Gensler has been vocal about the vague nature of SPAC transactions as the new administration looks set to stamp its authority on the securities industry. Gensler has said in testimony and commentary that SPAC transactions require increased oversight and transparency. However, deal flow has remained strong despite regulatory pressures from the SEC. SPAC IPOs have constituted 65% of all US IPOs in 2021 and 53% of all IPO revenue raised. The numbers represent sharp year-over-year increases, a trend that has caught the attention of financial regulators. 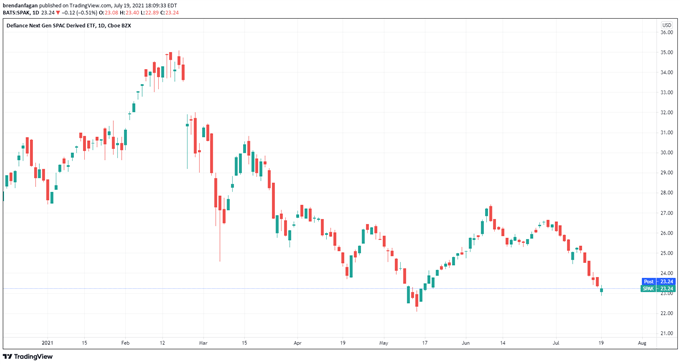 As “retail mania” in equity markets subsides, investment products that dominated headlines have cooled off, with SPACs being no exception. SPAK, an actively managed ETF that tracks post-merger companies for two years, sits 37% below its recent all-time high from February. Other proxies for speculative behavior such as meme stocks and options activity have also declined as broader markets digest growth concerns and a resurgence in COVID.

Bitcoin falls to sixth for daily revenue, with just 12% of Ethereum’s fees