Platinum prices are on track to record a yearly loss just north of 10% as the New Year approaches. The precious metal – also heavily used across various industrial applications – was pressured by a global chip shortage that saw automobile production plummet, brought on by the Covid pandemic. The silver-white metal’s price is heavily influenced by car production due to its use in catalytic converters.

The metal is up over 2.5% for December, but the Omicron variant has put a big question mark over a further recovery. A large chunk of automobiles and the computer chips they rely upon come from Asia, specifically China, Japan and South Korea. Car production started to recover in the second half of 2021, with Japan posting a massive 43.1% jump in automobile output for November. However, that was before Omicron headlines started to cross the wires.

Since Asian countries typically take a stronger approach to a national strategy to fight Covid outbreaks, Omicron may very well reverse headway made in November. That said, traders have increased bets against the metal, with the latest Commitments of Traders report from the CFTC showing a 2,912 increase in non-commercial shorts. Those speculative traders haven’t been this short since September.

While at first, it may seem that an increase in short bets is bearish for prices, it increases the chance for prices to rally, particularly when those bets hit multi-month highs. The last time traders were this bearishly positioned on platinum in September, prices subsequently rallied, as traders bought to cover their short positions.

That is known as a “short squeeze.” The chart below showing platinum prices and non-commercial longs and shorts illustrates the relationship. That said, it appears that there could be another chance in the short term for another rally, especially if we receive a fundamental catalyst that bodes well for precious or industrial metals. 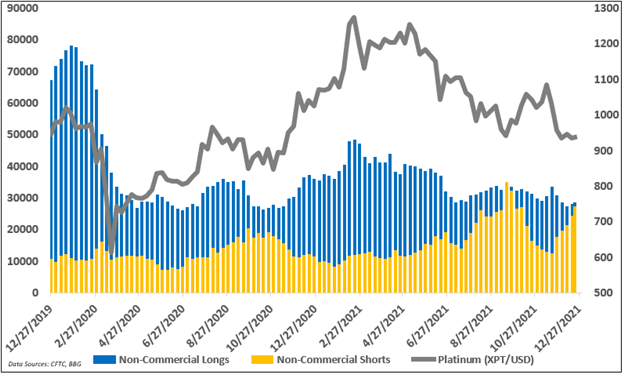 XPT/USD is trading below its key 50-, 100- and 200-day Simple Moving Averages (SMAs). Support from a long-term Symmetrical Triangle has helped underpin prices this month after nearly breaching the pattern. Nevertheless, prices look primed to fall back to triangle support, with bearish energy building from the 50-day SMA crossing below the 100-day SMA this week. MACD also appears to be fizzling out below the oscillator’s centerline. The 12-day Exponential Moving Average appears to be the last line of defense at the current position. 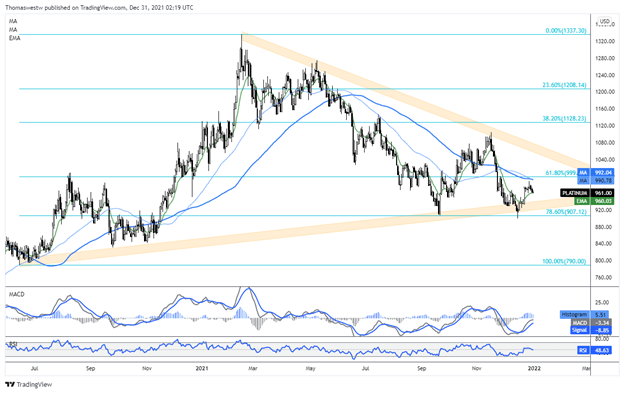 Crude Oil Dips After Record-Breaking Year as US Dollar Sidelined. Where to for WTI in 2022?