Tomorrow, President Cyril Ramaphosa is set to present the economic reconstruction and recovery plan to a special sitting of parliament, focusing on eight priority areas.

The plan seeks to address a number of longstanding economic issues that have been exacerbated by Covid-19 and paves a way forward as we adapt to the ‘new normal’ as society transitions to a reality of co-existence with Covid-19.

Ramaphosa briefly introduced some information on the plan to a two-day Cabinet lekgotla (meeting called by government to discuss strategy planning) on the 7th of October.

Eight Priority Areas of the Economic Reconstruction and Recovery Plan:

However, funding economic recovery plan poses a potential challenge as the South Africa is already running a budget deficit, expected to be in the region of 14.6% of GDP. Thursday may provide further clarity regarding exactly how these initiatives will be funded, whether it will be via public or private investment or a combination of both.

The USD/ZAR currency pair continues to trade beneath the descending trendline from a long term perspective. 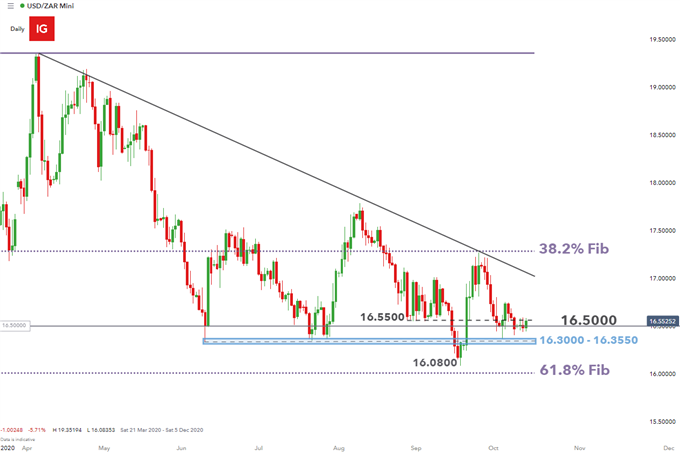 Find out what is in store for the dollar in Q4

Taking a closer look at the 4-hour chart – using a technique called multiple time frame analysis – there is a clear consolidation pattern where price had traded around 16.5000 (shown in the grey rectangle).

Consolidation, in some instances, precede bouts of volatility and with the US being just under 3 weeks from presidential elections there may very well be an uptick in volatility as we approach election day.

What does the US presidential election mean for the US dollar

On the 4-hour chart, a close above the 16.7700 level could spark further selling of the Rand to a degree and may see the descending trendline come back into play as a form or resistance.

However, with talks of a stimulus package in the US moving in the right direction, the prospect of a multi-billion dollar cash injection may weigh even more on what is a relatively weaker dollar. A move below 16.5000 followed by a close below the 16.3000 may see the next level of support coming in at the swing low of 16.0830 before testing the 61.8% Fib retracement drawn from the January low to the April high. 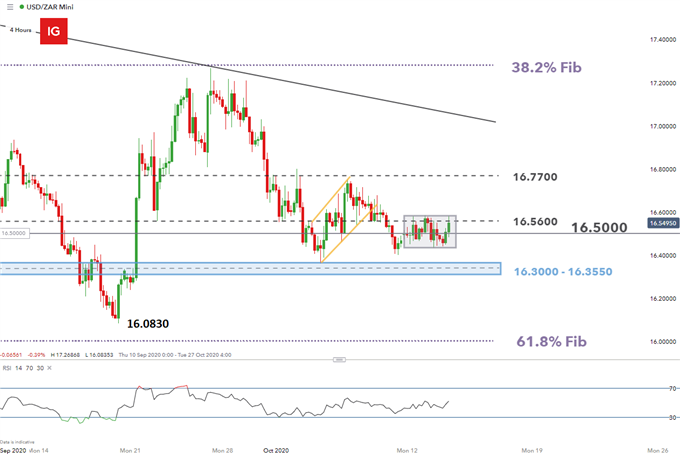 Mr Mboweni has written to the Speaker of the national Assembly requesting to delay the Mid Term Budget Policy Statement by one week to account for recent developments, most notably, the economic reconstruction and recovery plan time frames.

If accepted, the statement will be presented on the 28th of October and not the 21st as originally planned.

Mr Mboweni faces a mammoth task as he is set to provide an update on government’s priorities over the next three years. In the supplementary budget in June, the minister already warned of a sovereign debt crisis if economic growth continued to stagnate.

How to Trade the Euro, NOK and SEK Using the Core-Perimeter Model

If Bitcoin doesn’t break record highs right away, it wouldn’t be the...