This week we see a continuation of earnings reports. In the absence of any large tech names, we highlight Peloton’s massive decline and disappointing earnings per share estimate.

Peloton has dropped around 91% since its peak in January 2021. The boutique fitness company has struggled with inflation and supply chain issues in conjunction with lower demand for its products.

Walt Disney’s stock suffered in early 2020 but recovered during the lockdown period as streaming services took off. The chart below depicts the very different picture for streaming services, in this case Netflix and Disney, as they struggle to acquire new subscribers at the same rate as before. While the S&P 500 Index is down for the year, since April 2019 it has held way above the respective performances of Walt Disney and particularly Netflix. While Netflix is purely a streaming company, Walt Disney can rely on the fact that its business operations are more diversified in nature, allowing it to withstand periods of lower streaming demand.

Disney and Netflix vs S&P 500 Index 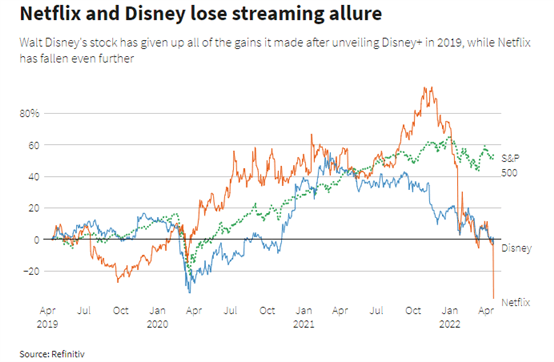 Asian Indices traded lower with the Hang Seng trading lower by 3.8% while the Shanghai Composite ended the day fairly unchanged. The Nikkei close 2.5% down. In Europe, the FTSE is down 1.8% on the day while the DAX is 1.72% lower at the time of writing.

S&P E-mini futures, likewise, is down 1.92% ahead of the cash open. Last week, the index flirted with a breakdown of the zone around 4130 but closed within the zone (purple rectangle). Today, the downtrend continues, after the gap down which now approaches 4030. The next level of support comes in at 3950. The longer-term reversal pattern (head and shoulders) and the breach below the neckline reinforces the bearish price action that has been witnessed. Resistance lies at prior support of 4130.

Tech heavyweights, which were some of the main beneficiaries during the lockdown period of low interest rates and excess liquidity, are now succumbing to the effects of lower global growth and lower demand during the rate hiking cycle being adopted by the Fed. 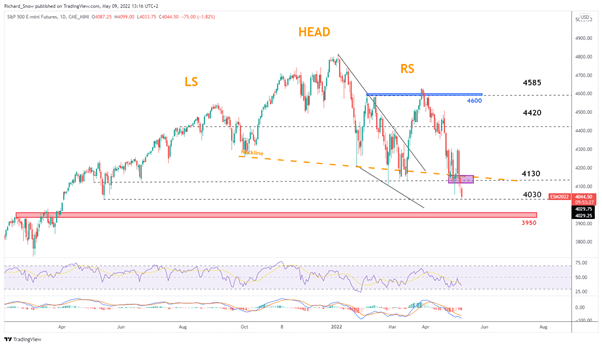 Deribit and OKX attract significant traffic from China despite a blanket ban: Report

Understand the Risk. Accept the Risk.