Stock Market Forecast for the Week Ahead: Neutral

Stock Market Forecast for the Week Ahead

The Dow Jones, Nasdaq 100 and S&P 500 endured considerable volatility last week as the three indices declined roughly -1.1%, -2.3% and -1.4% respectively. White-hot inflation data was largely to blame for the initial wave of selling as investors reassessed the Fed’s policy path given new economic readings. As the week progressed, disappointing retail sales and consumer confidence data helped to soothe hawkish fears and the indices were able to close the week off the lows.

That being said, the fundamental forces that were driving price action last week will likely persist into the weeks ahead as market participants attempt to gauge precisely when the Fed will look to shift its policy path. Fed Chairman Jerome Powell has repeatedly stated any change would be communicated well in advance which has led investors to suspect recent hawkish remarks from some Fed officials could be the start of that communication. Crucially, there has been no official statement and the commentary was only slightly hawkish. 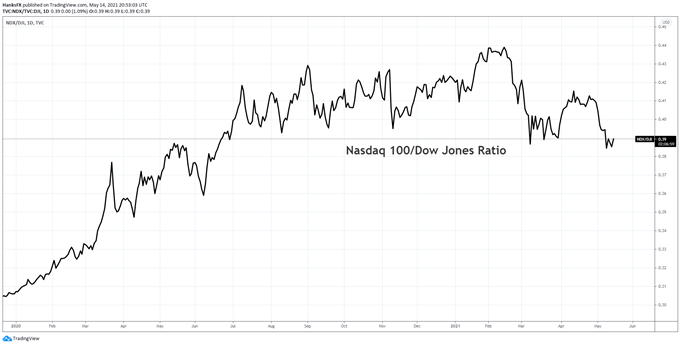 Nevertheless, the concern has put investors on edge and sectors of the market that are particularly exposed to more hawkish policy – namely those with lofty valuation metrics – were firmly on the backfoot last week as a result. The phenomenon is just another leg of the ongoing reflation trade that has seen investors exit growth in favor of value which has led the Dow to outperform the Nasdaq. Risk appetite was also curtailed elsewhere as investors shy away from popular growth trades like Cathie Wood’s ARKK fund. 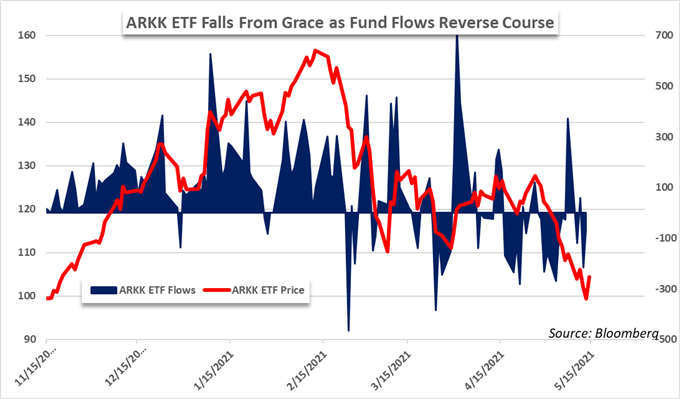 The fund saw its unbridled steam of inflows slow in mid-February, only to see outflows outpace demand since mid-March. ARKK captured the interest of many investors looking to speculate on the next generation of technology and growth stocks but the reflation trade has worked to seriously stem the enthusiasm. Evidently, concern around inflation and the subsequent effect on the Fed’s policy looks to be the driving force of price action in the stock market.

With that in mind, traders will look to the upcoming Fed minutes in the week ahead for further insight. While stocks closed off their lows last week, there is little to suggest the market has seen the last of volatility derived from this theme and investors should be cautious as a result. In the meantime, follow @PeterHanksFXon Twitter for updates and analysis.

The regulators are coming for crypto: What investors need to know