US Dollar Price, Chart, and Analysis

The minutes of the January 26 FOMC meeting highlighted the central bank’s concern over the current level of inflation in the US but disappointed the market by giving no new clues, or a timetable, on the path and pace of interest rate hikes and balance sheet reduction. The minutes noted that ‘a significant reduction in the size of the balance sheet would likely be appropriate’ while a couple of members favored ending asset purchases sooner rather than later to ‘send a stronger signal that the Committee was committed to bringing down inflation’. Inflation was seen to be spreading throughout the economy and continued to exceed the central bank’s longer-term projections. While the minutes had a slightly hawkish overtone, financial markets have already priced in a series of interest rate hikes this year. The market pricing of a 50 basis point hike at the next Fed meeting in March continues to swing around with the likelyhood now seen around 50% after having been nearly fully priced in last week.

The US dollar drifted lower post-FOMC but remains in a dominant ascending channel that has been in force since mid-June last year. The multi-month series of higher lows and higher highs remain in place. Within this ascending channel there is a sideways trading range that has remained in force despite a couple of failed breakouts. A support zone between 95.10 and 95.50 should provide short-term support, allowing the USD to re-test the February 14 high at 96.38. 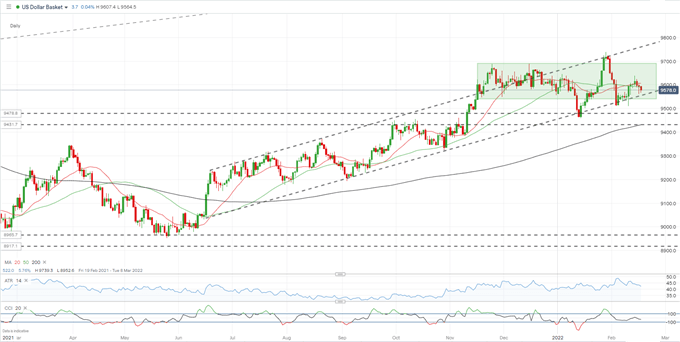 What is your view on the US Dollar – bullish or bearish?? You can let us know via the form at the end of this piece or you can contact the author via Twitter @nickcawley1.

Crypto is like a ‘venereal disease’ and should be banned: Charlie Munger

US Dollar Selloff Unfazed by NFP Data with Focus on Election