USD/CAD attempts to retrace the decline following the update to Canada’s Employment report in an effort to retain the opening range for April, but lack of momentum to push back above the 50-Day SMA (1.2611) may lead to a further decline in the exchange rate like the price action seen earlier this year.

USD/CAD appears to be on track to test the monthly low (1.2502) as it extends the series of lower highs and lows from the previous week, and the exchange rate may continue to give back the rebound from the March low (1.2365) if it fails to retain the opening range for April.

It remains to be seen if the Bank of Canada’s (BoC) Business Outlook Survey will influence USD/CAD as the “Governing Council judges that the recovery continues to require extraordinary monetary policy support,” and the central bank may endorse a wait-and-see approach throughout the first half of 2021 as officials pledge to “provide the appropriate degree of monetary policy stimulus to support the recovery and achieve the inflation objective.”

However, the 303.1K expansion in employment may encourage the BoC to gradually adjust the forward guidance as the ongoing recovery in the labor market instills an improved outlook for growth, and Governor Tiff Macklem and Co. may sound less dovish at the next meeting on April 21 as the central bank is slated to update the Monetary Policy Report (MPR).

Until then, USD/CAD may continue to track the March range as it struggles to push back above the 50-Day SMA (1.2611), but the tilt in retail sentiment looks poised to persist as traders have been net-long the pair since May 2020. 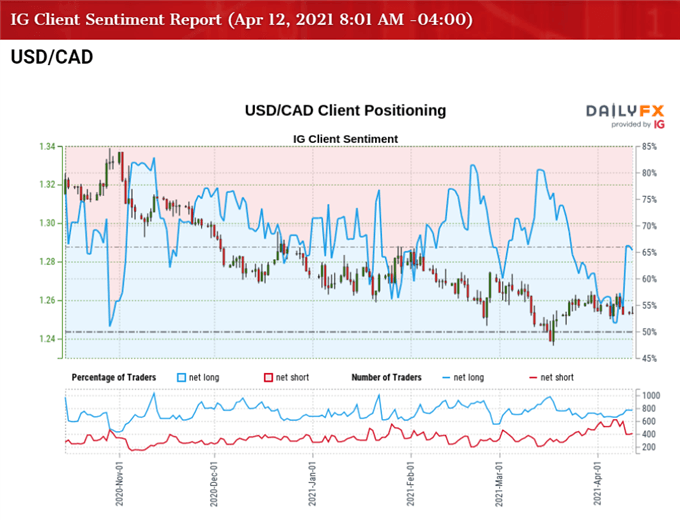 The IG Client Sentiment report shows 60.35% of traders are currently net-long USD/CAD, with the ratio of traders long to short standing at 1.52 to 1.

The number of traders net-long is 0.13% lower than yesterday and 16.08% higher from last week, while the number of traders net-short is 24.58% higher than yesterday and 5.31% lower from last week. The rise in net-long position has fueled the crowding behavior carried over from 2020 as 57.13% of traders were net-long USD/CAD during the previous week, while the decline in net-short interest could be a function of profit taking behavior as the exchange rate attempts to retrace the decline following the update to Canada’s Employment report.

With that said, lack of momentum to push back above the 50-Day SMA (1.2611) may lead to a further decline in USD/CAD like the price action seen earlier this year, and the exchange rate may continue to give back the rebound from the March low (1.2365) if it snaps the opening range for April.

NZD/USD Rate Reversal Takes Shape Ahead of May Low