The Bank of Japan (BoJ) announced no change to the interest rate, as expected, and continued to stress that it will “closely watch” the impact of sharp FX moves in relation to its effect on the local economy. The BoJ committed once more to unlimited 10-year JGB purchases to guide the yield towards its zero percent target, by a vote of 8-1.

In essence, the yen is now even less appealing from a fundamental perspective as major central banks like the Fed and Bank of Canada anticipate have hiked aggressively, with the view for more. A widening interest rate differential across the board highlights the greater ‘carry trade’ opportunity as investors and traders may look to borrow the low costing yen in favor of higher yielding currencies like the US and Canadian dollars.

In a rather strange move, the dollar witnessed a 2-day decline on the back of its aggressive 75 basis point hike on Wednesday, lifting weak currencies like the Yen. As such, we saw a move towards the prior high of 131.35 before returning to the longer-term uptrend.

The 4-hour chart highlights the large move before, during and after the announcement as it gathered momentum. The BoJ’s commitment to its dovish/supportive stance, has made way for ‘buy the dip’ sentiment as a deepening interest rate differential favors moves to the upside for USD/JPY. 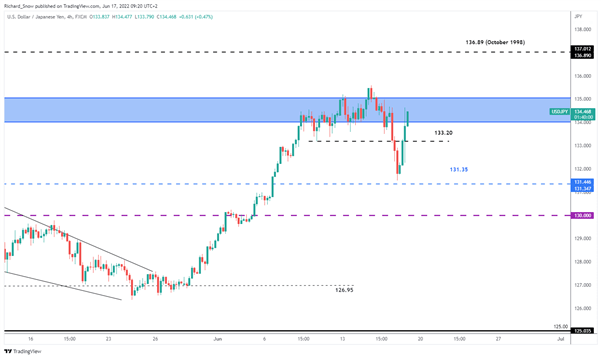 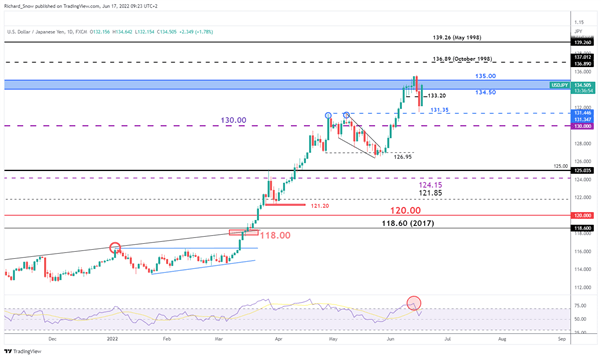 Next week is fairly light on the economic calendar but contains a rather important Japanese inflation reading on Friday. The BoJ has mentioned that near term inflation is anticipated to remain above 2% but anticipates inflationary pressures to ease into year end. However, consistent upward surprises in inflation will only add pressure on the BoJ and Japanese government as household incomes get squeezed even tighter. Keep an eye on any response from Tokyo or the BoJ if inflation beats expectation.

In addition, Fed Chairman Jerome Powell is set to speak later today at 12:45 (GMT) and the minutes of today’s BoJ meeting are made available on Wednesday next week.