Significant Change in Sentiment Could See an End to Yen Weakness

Comments from Japan’s top government spokesperson echoes the message issued in Friday’s joint Bank of Japan (BoJ), government statement – concerns over the yen’s sharp decline results in it being ready to respond appropriately.

In addition, BoJ chief Haruhiko Kuroda has made a significant U-turn regarding the yen’s decline. Previously, the Bank head alluded to the positives and negatives of yen weakness, while still favoring a gradual decline. In his latest address to parliament, Kuroda stated, “The yen’s recent sharp declines are negative for Japan’s economy and therefore undesirable, as they make it hard for companies to set business plans”.

Major Risk Events in the Week Ahead

This week sees an extraordinary amount of USD centric events being headlined by the FOMC rate decision and a special mention for US retail sales as the state of the US consumer has come under questions recently.

USD/JPY has witnessed another significant bullish run which appears to have paused somewhat, around the 135.00 psychological level. Taking into consideration the drastic U-turn in sentient from the BoJ and the overbought territory shown on the RSI, USD/JPY may be due a pullback.

That being said, it is extremely difficult to make a case against the high-flying dollar so it may be more beneficial to consider other yen crosses such as the euro, or pound. 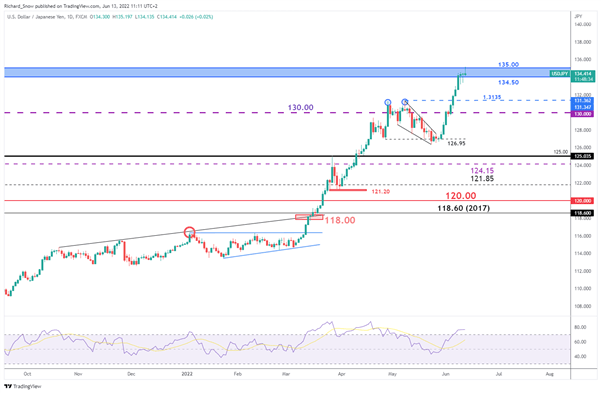 Zooming out to the monthly chart, it is possible to analyze the longer-term bullish run since the 120.00 break to the upside. We have tested the 2002 high with the 1998 high a fair distance from here. 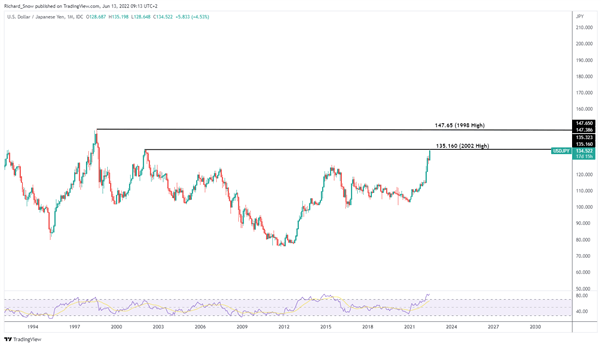 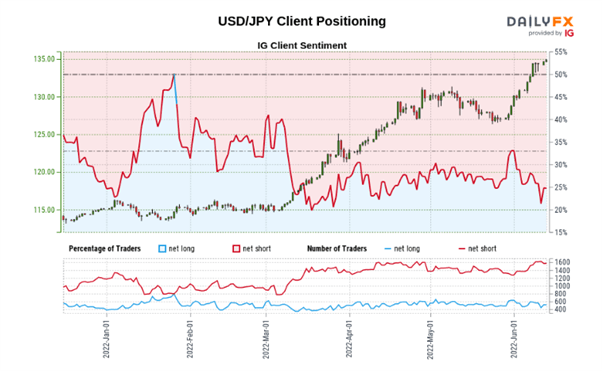 We typically take a contrarian view to crowd sentiment, and the fact traders are net-short suggests USD/JPY prices may continue to rise.

Yet traders are less net-short than yesterday and compared with last week. Recent changes in sentiment warn that the current USD/JPY price trend may soon reverse lower despite the fact traders remain net-short.