I am a firm believer in both technical and fundamental analysis, but neither should be taken on faith. Markets develop on the collective sense of the many participants; and that means participation levels, diverging expectations and shifting priority for the top fundamental theme can change the market’s focus and activity level. As it stands now, their seems to be a diffusion of influence between discrete financial risks (like crypto), inflation pressures, rate forecasts and growth concerns. All are important, but none are dominating the landscape. While that can allow for trends to develop when they are underway, it will also stifle follow through when there isn’t already a head of steam built up. That is the situation we found ourselves in this past session, when the S&P 500 managed to clear its smallest four-day range in three months. The head-and-shoulders pattern on the US index was clearer on the shorter time frame charts (15 minute), and Thursday’s open definitively cleared the 3,955 floor with a significant gap lower. That could have been a strong charge to turn the market lower after this most recent CPI-driven rally, but the lack of distinctive driver would mean a quick stall. Former support is now new resistance, but I don’t put much stock into its holding back any series tides. 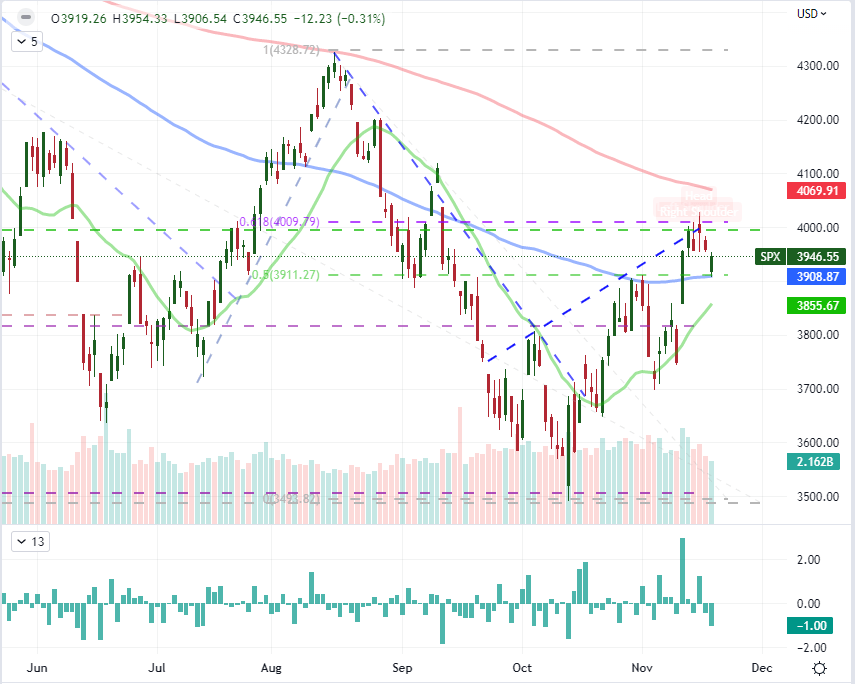 If you were looking to see what was the most prominent market-moving theme this past session – and thereby most likely to carry the thread through this final session of the week – there was a significant round of event risk that would reflect upon the economic health for some of the world’s largest economies. The UK Fiscal Statement was a possible outlier financial threat following the extreme volatility that followed the mini-budget fiasco at the end of September. Yet, the 55 billion pound budget with tax hikes and spending cuts was met with general restraint – equally remarkable given that Chancellor Hunt assessed that the UK economy was already in recession. For the world’s second largest economy, China, the Alibaba earnings struck a blow that would make it through the veil of stability raised by the government with an unexpected -$2.9 billion loss for the dominant online consumer firm. As for the US, the housing data and initial jobless claims was notable event risk, but it was the steeping inversion of the US 10-year to 2-year Treasury yield curve to four decade lows that makes the grander impression. 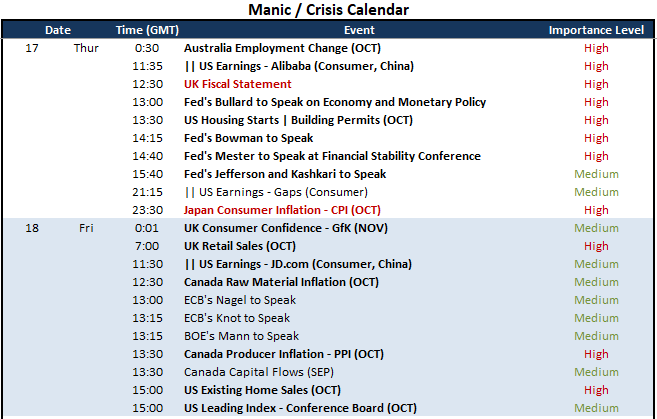 Fed Officials are More Hawkish than the Markets

While the US Dollar was fairly restrained this past session, there was some fundamental upheaval in rate expectations fueled by Fed rhetoric. Among the many speakers among the Fed leadership this past session, the remarks from Minneapolis Fed President Neel Kashkari and St Louis Fed President James Bullard were the most noteworthy. Kashkari – historically a prominent dove – suggested that despite last week’s CPI update, there was no material sign that inflation was close to being defeated. Bullard was more explicit in saying the 375 basis points worth of hikes this year seems to have had limited impact on inflation thus far; and even a dovish shift going forward would necessitate a minimum of a further 100 bps worth of hikes going forward. The market seems to be slowly heeding the Fed’s warnings. The terminal rate priced in by Fed Fund futures edged up to a probable peak around 5.00 – 5.25 in May and June. Now, the fact that the Fed doesn’t believe there are any rate cuts to come in 2023 while the market is pricing them in is another disparity that should be monitored.

Table of Fed Fund Rate Range Probabilities Through Next Year

Table from the CME’s FedWatch

The S&P 500’s congestion leading to its eventual break isn’t the only pattern of this nature to be found across the markets. Another benchmark that has kept near the top of my watch list is USDJPY. The past four day range is not an extreme low (as a percentage of spot) for the exchange rate, but it is consolidation that counteracts the assumptions of a building momentum that seemed to follow the Dollar’s post-CPI tumble from last week. The technical picture holds a trendline support around 138, but there doesn’t seem to be much more weight behind this temporary floor. Instead, the fundamentals are more interesting here. Risk trends is a wash with this cross and recession risks doesn’t seem to be a differentiating factor like it is with EURUSD. Instead, it is about rate forecast differentials; and the jawboning by the Fed will put bullish pressure behind the cross. It is not a certain outcome, but a bullish break fits the larger trend and prevailing fundamental tide. 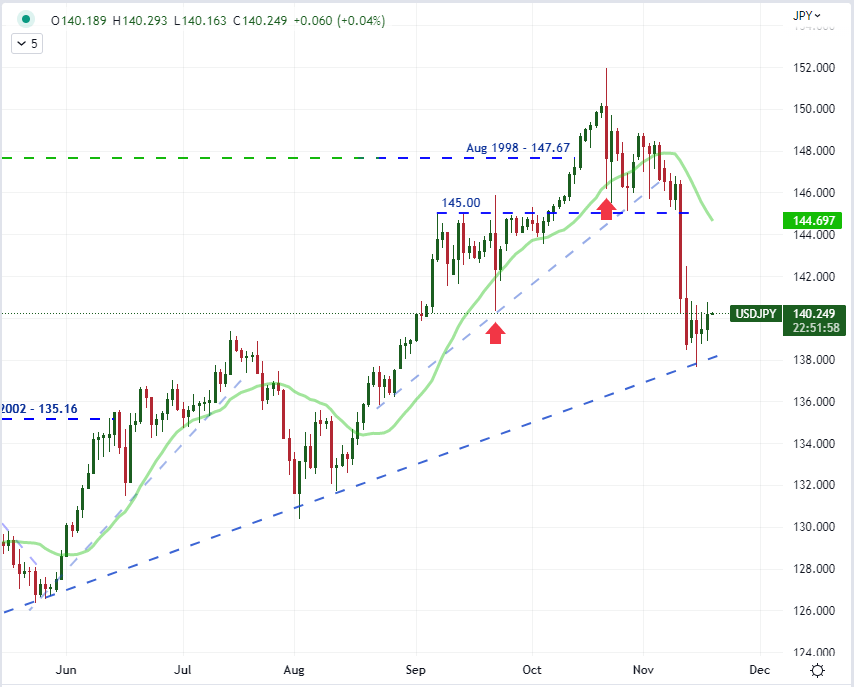 S&amp;P 500 Looks to ISM Manufacturing for Next Price Action Driver – a Preview