Turkey’s Central Bank has left rates unchanged at 19% for a second month in a row, as expected by many analysts. The CBRT has kept monetary policy stable in an attempt to keep rates above inflation in an attempt to maintain a strong disinflationary effect until strong indicators point to a permanent fall in inflation

Turkish inflation accelerated for a seventh month in April, spurred on by a weak lira and rising global energy prices. The latest reading came in at 17.14%, meaning that real rates are just under 2% for now. But new bank Governor Sahap Kavcioglu predicted the pace of price gains would start dropping to 12.2% by the end of 2021. This would allow further margin to lower rates in the coming months.

USDTRY dropped 0.6% after the announcement lack of a rate cut improves slightly the fundamentals for the Lira, although the overall move has been limited as the rate decision was as expected.

USD/TRY has been trading in an ascending channel over the last week as the language in the last meeting seemed to suggest that the Central Bank was looking for opportunities to cut rates in the immediate future, despite persistent double-digit inflation. The Lira has also been under pressure as previous governors that hiked rates have been dismissed, questioning the independence of the CBRT, which has weighed heavily on its domestic markets.

Cutting now would have risked further turbulence for the Lira which has weakened more than 15% against the dollar since the new governor took over at the bank on March 20. 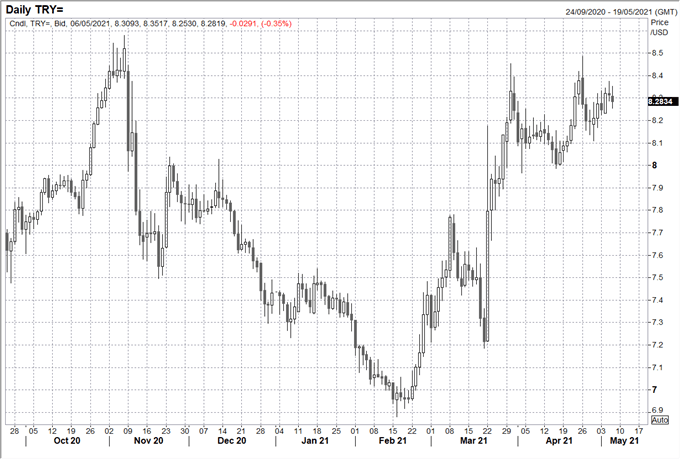 Gold Price Latest – XAU/USD Trapped by Resistance, Will US NFPS Stoke a Move in US Treasury Yields?