ZEW data shows a better-than-expected outlook for the euro zone and German economies over the next 6 months. While the data for both readings remain in negative territory, the euro zone economic sentiment data came in at a -29.5 vs -43 previously, slightly elevating the euro against the USD, however, the pair is little changed. German ZEW economic sentiment printed at -34.3 vs -42 forecasted.

Economic sentiment in the euro zone and Germany have been on a downward trajectory since the massively negative print in March 2022, going from 54.30 to -39.30. The cause of the drop was indeed the Russian invasion of Ukraine with such close proximity to the eurozone, geographically and economically.

The euro has struggled against the high yielding currencies like the US and Canadian dollars but has fared much better against the pound.

EUR/USD continues its daily range and trades slightly higher than before the release, however, maintaining the short-term upward direction. 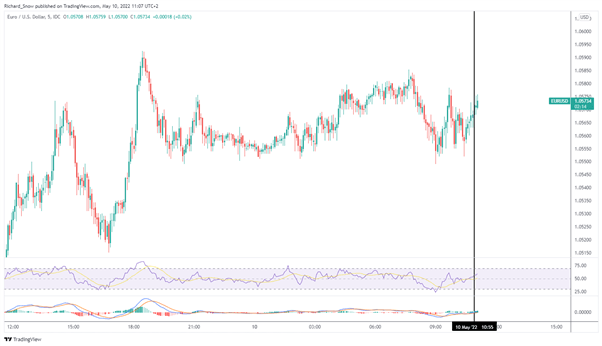 US Inflation Cools to 8.3% but Eases Less than Forecast, Nasdaq 100 Sinks as Yields Rise