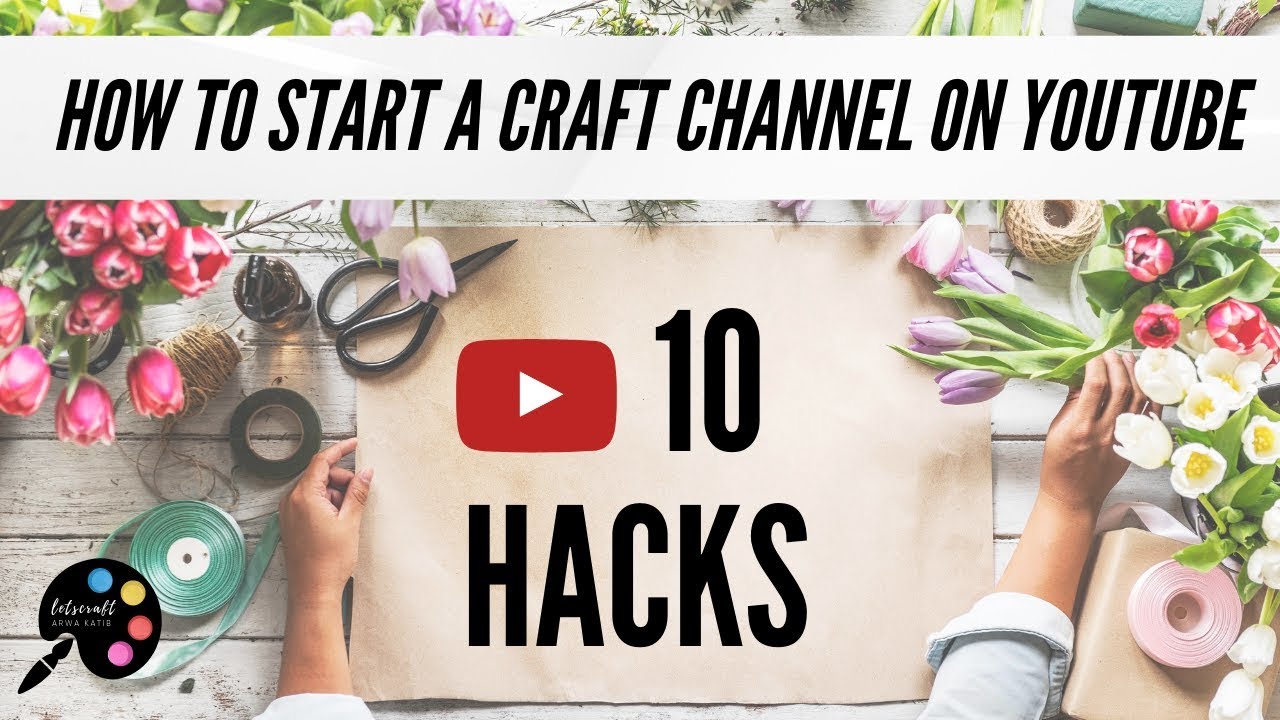 Starting a DIY YouTube Channel can be one of the Most Rewarding…and Profitable Businesses You can Start.

If you’re like me, growing up on episodes of Tim Allen’s Home Improvement and Bob Vila’s This Old House, you’ve probably dreamed at least once about becoming a celebrity home improvement expert.

If you’re exactly like me…you probably gave up on the idea after a few smashed fingers.

But if you’ve got just a little more savvy with tools than I do, that dream could be a close reality by starting a DIY channel on YouTube.

I researched DIY YouTube channels and talked to a full-time DIY YouTuber to reveal all the nuts and bolts to starting your own DIY and craft video channel!

While DIY channels on YouTube aren’t quite as popular as music channels or those for kids, they’re still some of the most popular on the platform.

That popularity comes from a combination of things that make DIY and craft channels irresistible.

We are visual animals and it’s one of the strongest senses we have. Many people have trouble learning if there’s not a visual component. That means videos are a must if you’re trying to learn something you might not have much experience in like home improvement.

Even if you never plan on installing your own flooring or creating a three-story birdhouse, millions tune into the videos for a sense of vicarious accomplishment. Watching someone create something amazing out of ordinary materials, it makes us feel like we can do anything and gives us that sense of accomplishment.

Add all this with imagery that is just so powerful and you’ve got a path to huge success on YouTube…an amazing business and a whole ‘lotta money!

How Much Money Can You Make with a DIY Channel?

Speaking of the money, DIY channels are some of the best to monetize on YouTube. While lifestyle and kids channels might get all of $0.003 per view for ad rates, craft and DIY channels can make twice that amount on pre-video ads.

Not only will you make money on the advertising before your videos but the perks and sponsorships to a DIY channel come along faster than you see in other topics.

Compensation for most channels starts with free tools and resources. Black & Decker spends millions a year in advertising. Think of how much more cost-effective it is to just give out a few free cordless drills to influencers and let them show how easy it is to use the tools.

It’s not going to pay the bills immediately but get a few free tools each month and you’re easily looking at $500+ a year even for a new DIY channel.

Grow your YouTube community though and the paid sponsorships will follow fast. Not only has my DIY friend done several big sponsorships with national home improvement retailers, she and her three sons are now the official reps for the Home Depot Kid’s Workshops.

With sponsorship rates ranging from $0.035 to $0.15 per average viewership, this can easily reach into the thousands of dollars per video.

Actually starting a DIY channel on YouTube is the easy part. I’ll outline the steps below along with some tips and link to a quick-start guide.

Start with your About page and take advantage of the space. Think about the shared beliefs in people you want to attract and how you want to build that community.

How to Make Money with a Craft or DIY Channel

If you’ve been following the blog, you know I always recommend a broad approach to making money online. Any one of my online income sources can grow to tens of thousands a month but depending on just one leaves me at a huge risk if something happens to that income stream.

Search engines change their ranking. YouTube changes its ad policy and sponsors pull back on spending. DO NOT rely on just one income source for your online business!

Ask any YouTuber and they’ll give you their three secret tips to growing a channel…but then you look at their channel and wonder why they still only have a few hundred subscribers.

Not so with Serena of ThriftDiving! We met a couple years ago at a bloggers’ conference and she KNOWS Her Stuff! She’s built a community of more than 346,000 subscribers on her DIY channel and they’re some of the most engaged fans I’ve seen.

Serena has signed Home Depot as a major sponsor and her two boys are now the official Home Depot Kid’s Workshops reps! Follow Serena and her DIY success on Instagram.

I reached out to get her three favorite success tips to growing a DIY channel.

Show your mistakes. As a DIY’er, when I post tutorials, I never try to be the expert. I am a teacher, but sometimes my teaching comes from a place of mistakes I have made in a project, and I’m not afraid to show that. People appreciate it and make me appear human. Relatability is important for success!

I love this! It can be so easy for DIY’ers to get discouraged when their projects don’t come out perfect like the host’s. It helps to show them you’re human just like they are!

Don’t follow the herd. Just because everyone else is using click bait…thumbnails with crazy expressions and tons of emojis….etc., don’t feel you have to follow the crowd. Do what feels authentic to you. People who find you and like you will see your authenticity and that you’re not just following the crowd.

Your personality IS your channel. Trying to be something you’re not is just going to come across as fake. Be you and the fans will follow!

Pique their interest. While you shouldn’t follow the crowds and use clickbait just to follow what everyone else is doing, you do have to keep a bit of intrigue when doing videos. As a DIYer, I find that videos are more successful when I am doing a “BEFORE” and “AFTER” project and I save the “AFTER” for the end of the video.

People don’t want everything placed before them at the start of the video, or even in the thumbnail. So I used “BEFORE” pictures in my thumbnails and people are more likely to click and watch because they want to see what it looks like when I’m done with the project and to hear about everything that went into it. Pique their interest, but don’t clickbait them.

Starting a DIY YouTube channel can be one of the most rewarding and profitable ways to make money online. Not only do you get the satisfaction of creating some great projects but can turn it all into big business. Start with your passion, remember your community and you’ll have a successful DIY channel in no time!

Championing Blockchain Education in Africa: Women Leading the Bitcoin Cause

Is the Bitcoin Bull Market in Jeopardy After Failure to Break $12,000?

20 Ways to Make Extra Money From Home With Paid Surveys

4 Tips: How to Pass Your General Transcription Employment Test