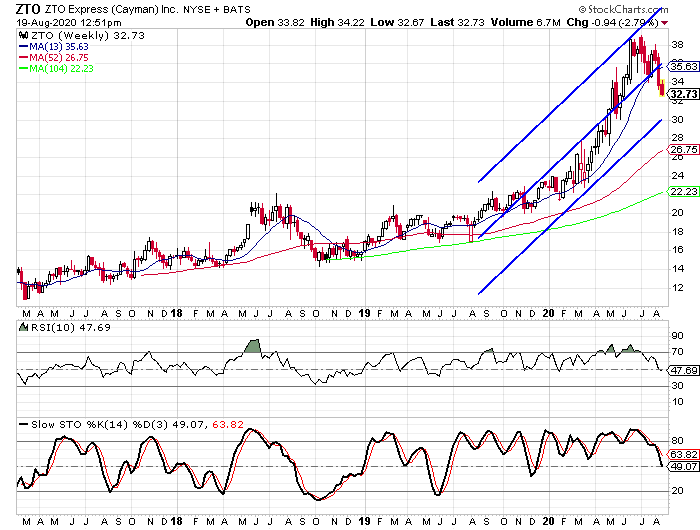 Over the last couple of years, I have written about Chinese express delivery company ZTO Express (ZTO) on a couple of occasions. I first wrote about it back in March ’19 and then I wrote about it again this past January. In both of those previous instances, I had a long-term bullish outlook for the stock, but in both instances, I was a little worried about the overbought levels on the weekly oscillators.

In both of the previous instances where I wrote about ZTO Express, the stock did drop slightly and the weekly overbought/oversold indicators moved out of overbought territory, then the stock rallied. The rally since the article in January was especially strong until the last few months. In the last nine weeks, ZTO has fallen in seven of them.

The fundamentals for the company are still well above average and the sentiment toward the stock is mixed – just like they were in my last two reports. One thing that is different this time is that the stock isn’t overbought, thanks to the decline over the last nine weeks.

If we look at the weekly chart, we see a standard deviation channel for the last year. The recent pullback has brought the stock down below the middle regression line for the first time since April and it is the closest it has been to the lower rail of the channel since back in February. 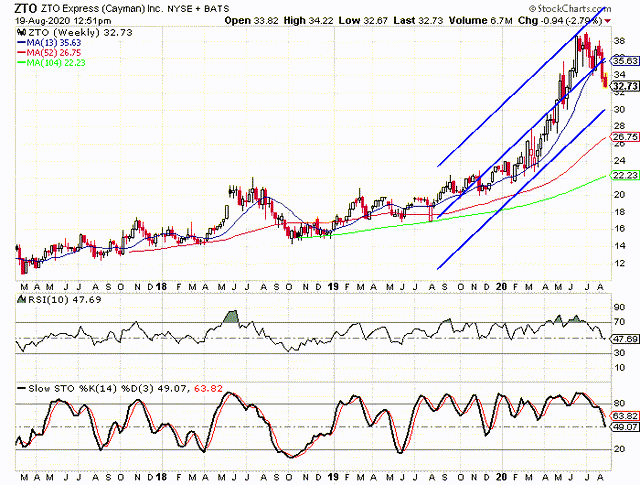 The 10-week RSI dipped below the 50 level in the last few weeks and the indicators hadn’t been below 50 since February. We see the stochastic indicators is the lowest they have been since last November/December time frame.

The Fundamentals are Still Above Average

One of the first things that drew my attention to ZTO Express are the fundamental indicators. I use Investor’s Business Daily’s EPS Ratings and the SMR Ratings as a quick reference of companies I need to look at more closely. I look for an EPS rating of 80 or higher because that means the company is among the top 20% of the companies in IBD’s database in terms of earnings growth for the last few years with a heavier weighting on the most recent quarters.

On the SMR rating scale, I look for A-rated companies as that means the company has strong sales growth, a good profit margin, and a good return on equity. When I first wrote about ZTO, the company had an EPS rating of 96 and an SMR rating of an A. In January, those ratings were 94 and A. Today those figures are 83 and an A. The EPS rating is down a little, but still above the threshold I look for.

Despite Rally, Sentiment is Little Changed

One of the most incredible things about ZTO Express is that after all that has happened in the last year and a half, the sentiment toward the stock has hardly changed. We have seen a trade war between the U.S. and China escalate and then de-escalate and eventually an agreement was reached. We have seen a global pandemic shut down or stall every major economy around the world. And yet the sentiment toward ZTO has remained constant.

There are 18 analysts covering the stock at this time with 15 “buy” ratings and three “hold” ratings. This puts the buy percentage at 83.3%. The buy percentage is higher than the average stock, but it is almost exactly where it was in March ’19 and January of this year. The buy percentages in those instances were 86.7% and 89.5%, respectively.

The short interest ratio is at 4.2 currently and that is after the short interest dropped from 13.0 million to 12.5 million in the most recent report. The ratio itself has been very consistent with readings of 4.08 and 4.10 in my two previous articles.

The only area where we have seen any fluctuations in the sentiment is with the put/call ratio. The current ratio is at 1.29. That ratio is not only above average, but it is also much higher than the readings in my two previous reports. The previous readings were 0.95 (3/19) and 1.08 (1/20). There are currently 21,763 puts open and 16,864 calls open. These figures are substantially higher than the previous open interest levels. So not only are we seeing an increase in option activity, but option traders are becoming slightly more bearish toward the stock.

My Current Take on ZTO Express

With the fundamentals remaining strong even as the global economy has changed dramatically, ZTO is still attractive. The sentiment is still mixed with analysts more bullish than they are toward the average stock and short sellers more bearish toward the stock. Option traders have become more interested in ZTO and they have become more bearish. From a contrarian perspective, more bearish sentiment is a good thing as those bears can switch camps and help push the stock higher.

The biggest difference in the stock currently compared to where it was in my two previous reports is on the chart. Instead of being overbought and me suggesting that investors should wait for a dip before adding the stock, this time, the stock’s overbought/oversold indicators are at the lowest levels they have been at in six and nine months.

Personally, I think the recent pullback is creating a buying opportunity for investors and I think ZTO can move up above the $40 level within the next six to nine months. China seems to be ahead of the rest of the world in terms of an economic recovery from the virus and that should help ZTO as business starts to pick up again.

If you would like to learn more about protecting and growing your portfolio in all market environments, please consider joining The Hedged Alpha Strategy.

One new intermediate to long-term stock or ETF recommendation per week.

One or two option recommendations per month.

A weekly update with my views on the market, events to keep an eye on, and updates on active recommendations.

Bargain In The Platinum Industry, The Worst-In-Breed In Precious Metals