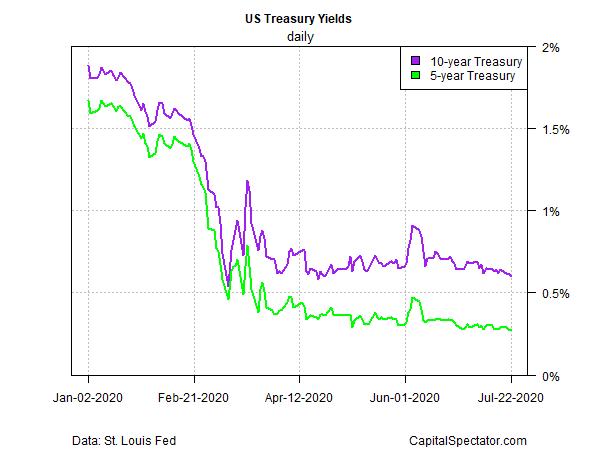 The demand for safe haven government bonds shows no sign of easing. It’s not hard to understand why when you consider renewed concern that the US economic recovery is cooling, US-China relations are deteriorating, and there are few signs that America is getting control of the coronavirus. It all adds up to a strengthening conviction that buying Treasuries, even at or near record low yields, remains a prudent choice.

Skeptics say that the movement in Treasury yields lately has been on par with watching paint dry. True, but lost in the casual observation of trend is the fact that rates on government bonds have been gradually slipping in recent weeks and appear set to test the lower range.

Any number of catalysts could trigger a breakthrough on the downside. Indeed, the news flow is certainly ripe with possibility, starting with Thursday’s update on US jobless claims, which are expected to remain well above the one-million mark for an 18th straight week.

Econoday.com’s consensus forecast calls for new filings for unemployment to rise by 1.308 million for the week through July 18. Although the stock market has so far shrugged off this leading indicator, the reality is that huge numbers of workers are still losing their jobs every week. Assuming this trend is a non-event for the economy becomes harder to rationalize with each passing week.

Although other economic indicators offer a more favorable view, The Capital Spectator believes that jobless claims are a ticking time bomb for the economy as long as the increases track recent history.

The Treasury market seems inclined to agree. The 5- and 10-year rates have been glued to the lower range of recent history and look headed to slip through the floor short of a material positive change in the news flow.

Perhaps a more revealing state of Treasury sentiment is the renewed decline in the real (inflation-adjusted) yield via inflation-indexed government bonds (a.k.a. TIPS). Notably (and ominously), the 10-year real yield on Wednesday (July 22) slipped deeper into negative territory, settling at -0.88%, based on daily numbers via Treasury.gov. That’s a new record low for TIPS and a sign of growing concern about the economic outlook.

The monetary policy implication of negative real yields that continue to slide: the Federal Reserve needs to do more to arrest the decline. Indeed, it’s no surprise to see that gold prices are rising while the US dollar continues to weaken. The US Dollar Index yesterday fell to its lowest level since March, and the downside momentum shows no signs of easing.

Will the central bank stand idly by as the greenback falls further? Unclear, although after a decade of extraordinary monetary policy (with mixed results) there’s a fierce debate among economists about what, if anything, the Fed can do with regard to additional efforts on stimulus.

One possibility, albeit a highly controversial one, is to lower the Fed’s target rate into negative territory. Fed Chairman Powell has previously said that’s not a viable option for US, which implies that other aspects of extraordinary policy prescriptions – including further ramping up of Treasury debt purchases – are on the table.

The bottom line: without a material change in the economic outlook for the better, gravity looks set to endure for Treasury yields on the nominal and real fronts. Unfortunately, assessing the economic outlook continues to be tightly bound with the trend in coronavirus data, which remains worrisome.

Here’s the latest update on the daily change in US COVID-19 cases through Wednesday:

And the equivalent for new US fatalities:

Until America can control the spread of the coronavirus (or an effective treatment and/or vaccine arrives), it’s hard to imagine that the recent calculus for the Treasury market will soon change. As Bloomberg columnist John Authers opines: “Think Real Yields Can’t Go Lower? Think Again.”

Another New High For Semis