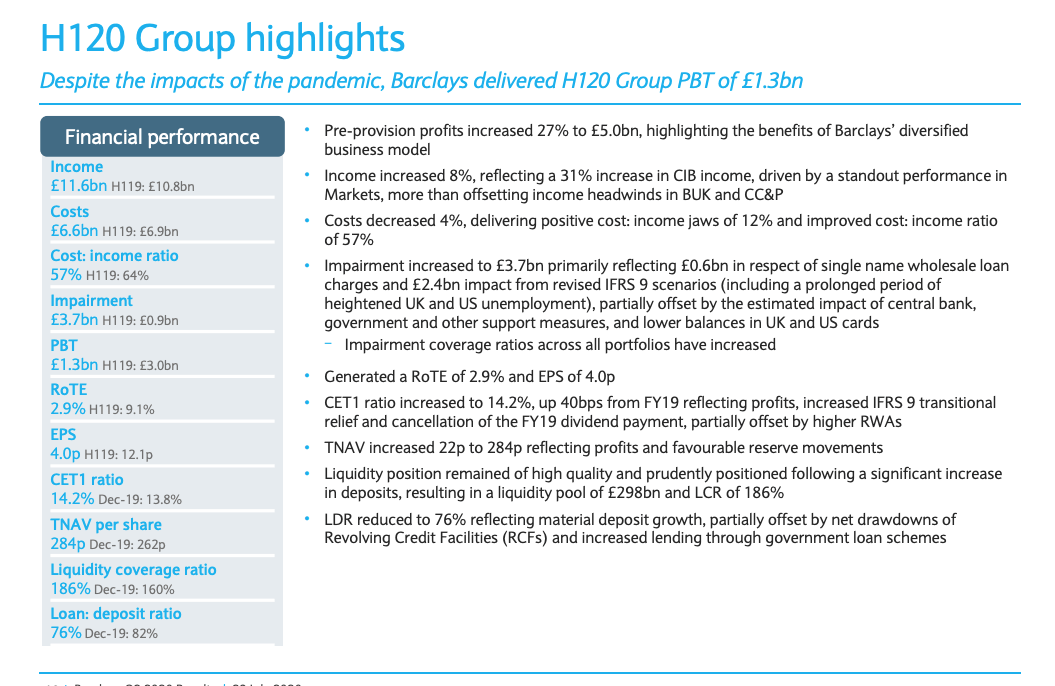 This is a very different situation to the 2008/2009 global financial crisis.

The banks are not the epicentre of the crisis. Nor is there a massive agenda re-regulating the banking industry and/or multi-billion fines for misconduct. Coming out of this crisis, BCS will not need to rebuild capital or its reputation.

In fact, the capital position of Barclays (BCS) as of Q2 2020 is the highest it has ever been with a Common Equity Tier 1 (CET1) position of 14.2 percent.

Yet investors are now valuing Barclays at a fraction of its tangible book value.

In my view, it is mainly sentiments-driven valuation as opposed to one driven by fundamentals.

Yes – there are significant headwinds. I am not disputing it.

These include lower rates for longer which have, and will continue to have, a negative impact on net-interest margins. There is also an unprecedented crisis to account for, with uncertain loan losses to be absorbed in the next 6 to 18 months.

Having said that, factoring in all of those headwinds, Barclays is just too cheap to ignore. In fact, I see it as an asymmetric risk/reward, and if and when sentiments will finally change, I fully expect it to melt-up.

As mentioned in my prior article, I am (slightly) less positive (although still bullish) on the large U.S. banks (including JPMorgan (JPM), Citigroup (C), Bank of America (BAC), Wells Fargo (WFC), Morgan Stanley (MS) and Goldman Sachs (GS)) due to relatively higher valuation and heightened U.S. political risks.

The narrative for the first six months of 2020

The results for Barclays 1H 2020 are summarised in the below chart: 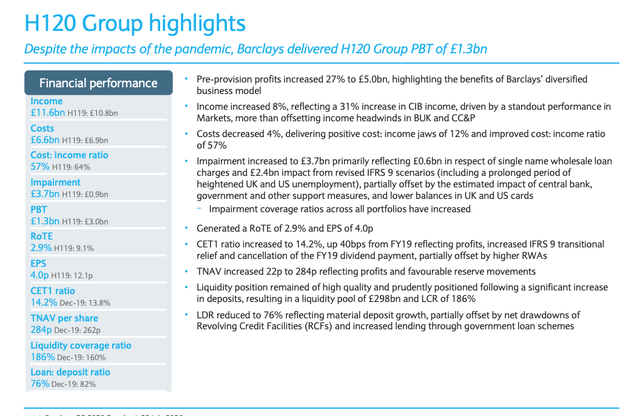 It was really a tale of two Barclays.

The Corporate and Investment Bank (CIB) has delivered an exceptional performance especially in the Markets division and overall delivered 31 percent year-on-year growth on the top line.

This offsets the negative impact from the Consumer related businesses which include Barclays U.K., U.S. Cards and the Payments business. All suffering from lower income emanating from lower rates and subdued client activity.

In spite of this unprecedented crisis, BCS remained profitable throughout. It also increased its CET1 ratio to 14.2 percent compared with an 11.2 percent minimum requirement and internal management target of 13.5 percent.

Although, it did benefit from a transitional capital relief for part of its IFRS 9 booked provision.

As mentioned above, BCS recognised upfront ~USD2.4 billion of provisions reflecting their expected incremental lifetime losses due to the COVID-19 crisis. These may or may not materialise in the next 18 months or so.

My view is that BCS has been overly-conservative in its provisioning approach. The numbers speak to it, specifically:

BCS has certainly taken a conservative position on provisions even when compared to U.S. and European peers.

Yes – the economic situation may deteriorate further and/or recovery may take longer than Barclays’ model currently predicts and that’s clearly a real risk. However, my view is that fiscal authorities in the U.S. and the U.K. effectively provide a put option and will come to the rescue, with a massive stimulus, should the economic situation worsen.

My base case is that some of the booked provisions will be reversed in future periods. The bank’s management psychology is readily apparent – the incentive is to book as much provisions as possible as early as possible provided the capital ratios remain healthy. It delivers a soothing message to both regulators (the bank is appropriately conservative) and the market (“nothing to worry about… move right along”).

Similar to all large banks, Barclays has suspended its redundancy programme until September 2020, so costs for H2 are more elevated than usual. But the opportunities going-forward for cost management in 2021 and beyond are staggering. One of the positives coming out of the COVID-19 crisis has been the “new ways of working” productivity initiatives. This will likely manifest in real estate rationalisation, lower travel and entertainment costs and acceleration of the digitisation of banking efforts.

These will help in offsetting some of the pain due to the structurally lower interest rates.

There are a number of puts and takes.

There is currently a transitional capital relief on IFRS9 provisions. So, the full impact of provisions booked will not be reflected in the CET1 ratio. However, once loan provisions move into Stage 3 (incurred losses), this will become a headwind to the capital position (as benefit of transition rules falls away and actual losses fully consume capital). The other moving parts include Risk-Weighted-Assets (RWAs) migration and pre-provision earnings.

So, near term, the key question is whether BCS pre-provisions earnings will be sufficient to offset Stage 3 loans and pro-cyclicality of RWAs. I believe there is a very good chance that this will indeed be the case and therefore BCS capital ratios will moderately increase in the 2nd half of 2020.

Coming out of this crisis, BCS will likely emerge with excess capital.

Prior to COVID-19, BCS was delivering normalised return on tangible equity (RoTCE) of between 9 and 10 percent. Given the lower interest rate environment and uncertain economic path going forward – therefore, I will assume a conservative 7 percent RoTCE on a normalised basis (BCS still maintains a greater than 10 percent RoTCE target).

With an estimated cost of capital of ~10 percent, this reflects a fair value of 0.7x tangible book (BCS currently trades at 0.33x tangible book).

To be fair, I expect BCS to deliver much higher returns with its current business mix (~9 percent seems a very reasonable proposition) even in a low interest rate environment.

The catalyst is Barclays’ ability to meaningfully return capital to shareholders in the form of dividends. Even more importantly, the introduction of a material buyback programme is a game changer. Buybacks are extremely accretive given current discount to book value – it is like buying a dollar for 33 cents.

From a timing perspective, the earliest BCS will recommence dividends and buybacks is 1H 2021. Ultimately, this will depend on the trajectory of this crisis and economic forecasts going forward.

Currently, banks are widely seen as uninvestible. Investors fear the low rate environment and loan losses due to the COVID-19 pandemic. BCS doesn’t pay you dividends to wait either – courtesy of the Bank of England’s (BOE) decision to suspend all U.K. banks’ dividends during this crisis.

This is precisely the time to buy BCS shares at a very low price. Once sentiments do change, the share price should melt-up.

Barclays will likely emerge from this crisis in a position of strength and with excess capital. It will also quickly revert to generating normalised earnings.

The strength in its capital position should enable it to commit to an aggressive capital return policy. And that’s where the catalyst lays. This could manifest as early as 1H 2021. The key items to watch is the economic narrative, trading income in CIB and its capital position. If the economy continues to recover, BCS may find itself with CET1 ratio above 14.5 percent (or even closer to 15 percent). The potential for buybacks will be massive.

Where a stock is priced at ~0.33x tangible book and it can afford to buy back stock – it is an amazingly accretive proposition for shareholders.

BCS is a conviction buy for me at current price and I employ a long-term options strategy to add leverage to my position.

As always, if you are not a seasoned investor – then avoid using options strategies. Complete loss of principal is distinct possibility so exercise appropriate caution.

Disclosure: I am/we are long BCS, C, JPM. I wrote this article myself, and it expresses my own opinions. I am not receiving compensation for it (other than from Seeking Alpha). I have no business relationship with any company whose stock is mentioned in this article.