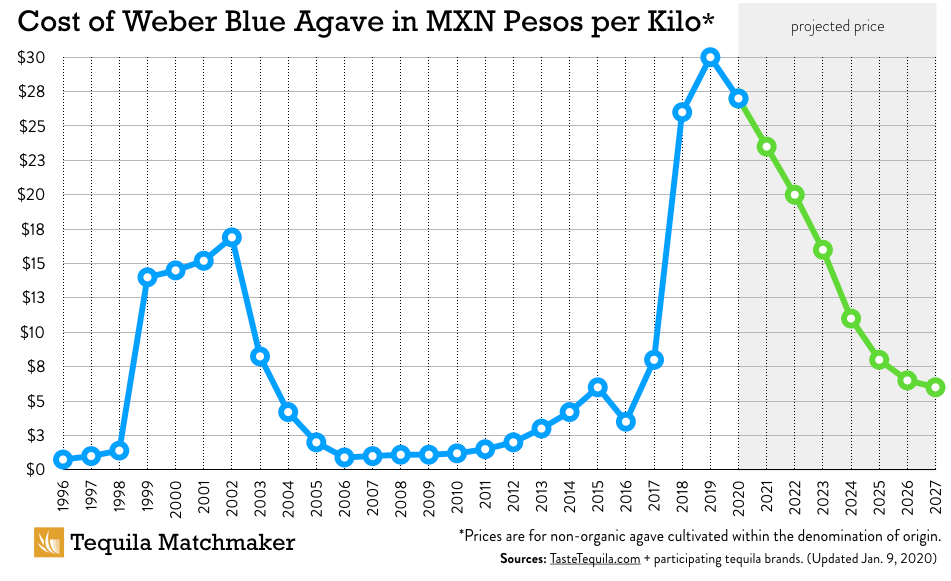 This article discusses the current agave shortage and its impact on Becle’s (OTCPK:BCCLF) profitability and valuation. My initial report on Becle provides a more detailed view of the company, its operations, and my investment thesis.

In 2019, Becle shipped 10.9 million cases of tequila making it the largest tequila producer in the world. Tequila sales equaled 61% of the company’s 2019 sales. The key raw material for Tequila is agave. For tequila to be called tequila, it must be made with the blue agave plant produced in a certain region in Mexico. On average, the agave plant takes 7 years to mature. The long maturation period means when prices are high, many producers plant agave in an attempt to capitalize on the higher prices. As supply comes on stream, prices fall and farmers often switch to other plants, as the return on investment is no longer acceptable creating future shortages. These boom-bust cycles have repeated themselves throughout history. The chart below from tastetequila.com illustrates the boom-bust nature of agave prices along with their forecast for its prices through 2027. 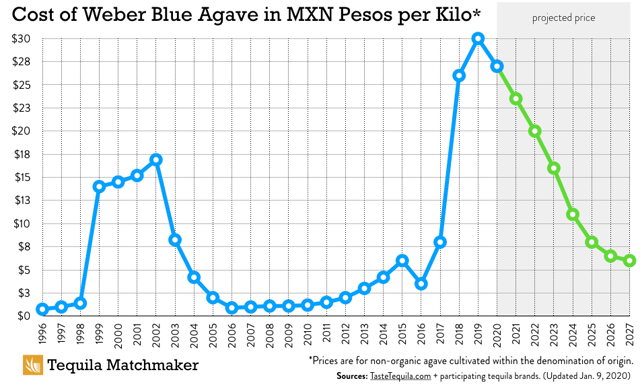 As of January 2020, agave prices are near all-time highs at roughly MXN28 per kilo. The agave price started to rise around 2014 or 2015 but really took off in 2017 and 2018. Given the long maturation of the agave plant, crops that were planted in 2014 and 2015 will not mature until 2021 or 2022. Those farmers that waited for price hikes in 2017 and 2018 will not see their plants mature until 2024 and 2025. The Consejo Regulador del Tequila (CRT) and the Camara Nacional de la Industria Tequilera (CNIT) believes the agave supply will increase dramatically over the next few years. By 2023, there could be an oversupply of agave and the price per kilo of agave could fall back to the MXN1 range seen from 2006 to 2010.

Other factors are driving agave prices higher. Other products made from agave like agave syrup and inulin consumed 20% of agave production in 2018 up from 0% during the previous price spike. Tequila has also seen a surge in craft tequilas. In 2019, 181 new tequila brands entered the market meaning there is competition for agave.

The Impact On Becle’s Profitability

In a recent conference call, the company stated 70% of tequila sold in the US was 51% tequilas, while 75% of tequila sold in Mexico was 100% tequilas. The company does not break down tequila volume by geography but I assume it matches the overall geographical breakdown (56% US, 33% Mexico, and 11% ROW). To get an estimated breakdown between 51% tequilas and 100% tequilas, 70% of volume in the US and ROW is assumed to be 51% tequila and 25% of Mexican volume is 51% tequila. All 51% tequila are assumed to use diffusers and need 1.7 kilos of agave per liter (3.3 X 51%). 100% tequila uses the traditional process and requires 7 kilos of agave per liter. The company’s agave self-sufficiency is estimated at 75%.

Becle is valued using a residual income model under three scenarios. The residual income model has a 5-year forecast period with a 4-year fade to terminal assumptions in 10 years. Under all scenarios, the only thing that changes in the operating margin based on different agave prices. The discount rate is 10%, the tax rate is 25%, and capital efficiency is equal to 2019’s invested capital turnover of 0.69 times. Sales growth is 10% over the next 5 years before fading to 5% in the terminal value. The tequila industry is growing at mid-single digits and Becle is losing market share.

There is a big shift towards premium products and the company’s average selling price is below the industry average. Jose Cuervo is the entry level mass-market brand. Given the trend toward premium products and Jose Cuervo’s positioning, sales growth at double the industry before fading to a terminal growth rate of 5% is aggressive. Other spirit categories are growing at low-single digits rather than mid-single digits, so as the tequila industry matures, the industry’s growth will slow. All fair values per share are discounted by 5% to account for the current pandemic. 5% is roughly equivalent to eliminating 1 year of free cash flow.

Under the base case, the operating margin continues at the average of the last 5 years (22.5%). The last 2 years saw the gross margin and operating margin hurt by soaring agave prices, but this is the nature of the industry. Price will not remain permanently depressed or permanently elevated so using a few years of depressed prices and 2 years of very high prices seems appropriate when valuing a long-lived asset with a series of booms and busts. The bear case assumes agave prices remained elevated forever (17.5%), while the bull case assumes agave prices remain depressed forever (27.5%).

Powerful Momentum Is Still Evident In The Foreign Exchange Market

BBN: Keep An Eye On The Rising Price